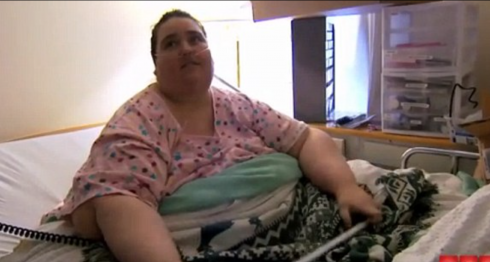 The season 2 episode of My 600-lb Life featuring Maryland native Penny Saeger is the TLC show’s most controversial episode to date. Unlike most of the people followed on this life-changing show, Penny made no progress one year out from risky weight loss surgery.

She was shown on camera eating calorie-ladder foods like fried wontons, and refusing to set goals for herself. She had been bed-ridden for four years at the time she underwent surgery, and made little progress attempting to walk again, even with the help of a physical therapist. When she repeatedly complained about not having dietary help or instruction, Dr. Nowzaradan had a nutritionist come to her apartment. When the dietician offered advice like eating egg whites instead of the whole egg, Penny scoffed, yet continued to see zero weight loss.

Penny was initially successful in losing 40 pounds prior to the surgery during a trial hospitalization that kept her on a 1,200 calorie diet. She started this process at 530 pounds, and got down to 490. After weight loss surgery, however, she gained five pounds, and stayed around 495 despite being in the same restricted calorie hospital situation she had been in prior to surgery. Dr. Nowzaradan said there was no way this could be unless she was somehow getting food snuck in.

Next Wednesday TLC airs an update on Penny’s situation a year since we last saw her, and according to the previews, she’s made little-to-zero progress. Dr. Nowzaradan see a lot of success stories from people 500-800 pounds, but he’s also witness some sad outcomes.

In a preview Penny claims that she’s “better off now than how I was before.” Dr. Nowzaradan, however, has a different take on the situation, “She’s trying to convince everybody she’s doing well. It’s a delusion.”

“She’s addicted to food, and she’ll do anything to get what she wants, but eventually it’s going to kill her,” grimly explains.

Penny is still unfazed, “I’m going to keep doing it like I want, at my own pace, but things keep happening to slow my progress.” Despite being given a plethora of information and tools for weight loss, she is still perplexed as to why she hasn’t lost weight, “I don’t know why this keeps happening to me. Why I have setbacks.”

Last week on Twitter, Penny noted that she has improved. She says she’s no longer diabetic, and has not been to the hospital in a year.

UPDATE: The show aired January, 21, 2015, and at the end of the update Penny reportedly had lost no weight, and possibly weighed more.

Here’s a conversation she had with a therapist over Skype on camera:

Penny: I’m down to 400, so I’ve actually had about 230-something pounds lost altogether so far.
Therapist: So you’re at 400 even right now?
Penny: Well, it’s 402.
Penny: I was gonna say at the moment I know that I’m heavier than that because of the infection. It’s just, like, fluid.
Therapist: So, this is just like the honest trust… You’re not up walking around? There might actually be a little bit of weight gain?
Penny: Well, I have a really terrible infection that has caused a wound on my right side. It’s so very painful. I mean I almost feel like I need to hold it in order to stand when I use a walker, so it’s made that situation very difficult. Right now feeling like I’m in a setback is very difficult, because I had made so much ground.
Therapist: Let’s stop right there, though. We’re not going to make excuses for anything, you and I.
Penny: That’s acceptable to me, yes.
Therapist: We’re not going to allow medical issues to play such a big role in your weight loss anymore. It’s very basic the body’s going to work. The more you’re moving, the quicker you’re going to heal. The less you move, the worse your abscess is going to get, the less you’re going to move. It’s very cyclical.
Penny: It’s a catch-22 is what I call it. It’s like a vicious cycle.
Therapist: And so I don’t look at it as a catch-22, because we already have the answer to fixing it right in front of us. And I just said it. You’ve got to move to get it healed. It’s just uncomfortable. Instead of allowing yourself to be bedridden again, what I want you to do, even if you can’t get up, I want you to exercise your arms. You said, your intention, the reason why we’re sitting here talking right now, is that you want to try to improve your life. I’m going to hold you accountable to that, okay?

According to the update, Penny only gets out of bed once every two months, but she maintains that everything is not only ok, but better than ever for her.

“The only thing that matters is my mind,” Penny says. “I’ve made great progress, no matter what a scale says or not . I’m doing so much more, and I could be happier with myself. Overall, I feel like I’m doing well. Life is a lot better.

“Am I going to have days when I fail? Yeah,” she continues. “But that doesn’t mean that tomorrow I don’t do the right thing again. I’m going to keep doing it like I want, at my own pace. Nothing’s going to change that. I feel like I’m doing well, and that makes me happy.”

Although Dr. Nowzaradan is frustrated with Penny, he still vows to help her again if she asks for it. D”Until something happens, she will not see any need to chance,” he says. “If she does decide to come back, we’ll help her again. But she’s going to have to make the choice for herself. Hopefully, before it’s too late.”