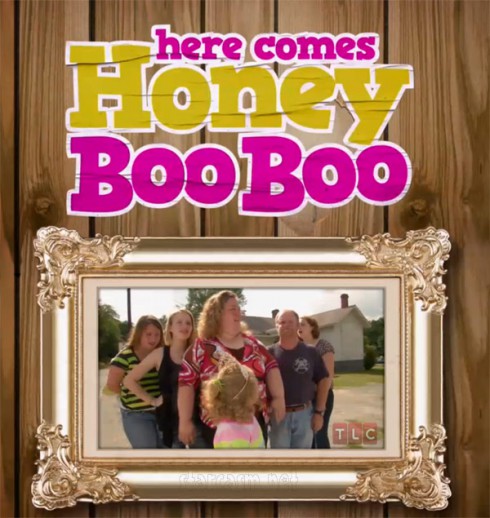 TLC’s new reality series Here Comes Honey Boo Boo has been the talk of the internet ever since more than two million viewers tuned in to watch six-year-old former Toddlers & Tiaras star Alana Thompson and her self-proclaimed redneck Georgia family participating in all manner of socially uncouth activities including: bobbing for pigs feet, mud flopping, excessive flatuation, and bidding on nearly-expired junk food at a local auction.

But little Alana isn’t the show’s only breakout star! That honor is shared by family matriarch, 33-year-old June Shannon. June’s appearance and parenting style came under intense scrutiny after her initial appearance on Toddlers & Tiaras (and subsequent appearances on numerous talk shows), but amazingly, June seems unfazed by the negativity and laughs it off with numerous tongue-in-cheeks comments about herself on camera — a huge part of the show’s shocking charm. Check out these two quotes from the premiere, both of which were sandwiched between laughter from June:

“You have to take pride in how you look. Granted, I ain’t the most beautimous out the box, but a little paint on this barn, shine it back to its original condition. Cause it shines up like it’s brand new.”

“There’s a lot of people that are bigger than me. They got five hundred chins. I only got about two or three, but I embrace it.”

All of that being said, something tells me June will be equally dismissive about this shocking announcement – she was arrested in 2008! 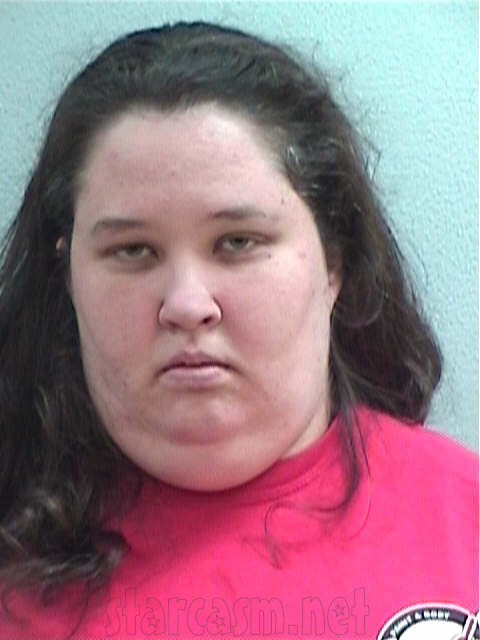 The above mug shot photo of June Shannon (often erroneously referred to as June Thompson because her daughter’s name is Alana Thompson) was taken in Henry County, Georgia, which is a little more than halfway to Atlanta from her current home in McIntyre. Online records indicate June was arrested on January 3 for the following:

A person commits the offense of theft by taking when he unlawfully takes or, being in lawful possession thereof, unlawfully appropriates any property of another with the intention of depriving him of the property, regardless of the manner in which the property is taken or appropriated.

The reason I included the actual Georgia statute is because there are other online court records that indicate June Shannon was the defendant in a couple of child support cases around this time, and it is my understanding that the “theft” charges covered in Statute 16-8-2 could actually be in reference to child support payments. (Any legal eagles out there want to help me out here?)

June’s oldest daughter is Anna (17) and as many people have pointed out online, that would mean June (now 33 according to the court records) was 16 at the oldest when Anna was born. June’s current partner Mike “Sugar Bear” Thompson is 40, which means he would have been approximately 23 when Anna was born. Some have used that fact to speculate that Anna may have a different father. (Plus, we just can’t imagine June and Sugar Bear ever having any custody issues!)

UPDATE – June Shannon has addressed her arrest on Facebook (since deleted, but saved by the fellow diligent Honey Boo Boo researchers at Jezebel.com). Here’s what June wrote about it:

yes I was arrested in.2008 over a contempt of court over a child case with one of girls and a theft charges that was DISMISSED the same day …second no sugarbear ain’t all the girls father he is only alanas …third yes CPS was in my life in march over the go go juice and a concert/bar appearance it happened one time and only one time would NEVER do it again but i made that decision b4 CPS came we went to court and the judge seen im NOT a bad person and there was NO abuse it was the WORST 4 days of my life and it was dismissed…and finally I have NEVER made fun of kaitlyns extra thumb on the right hand we have embraced it

We’ve got a lot of episodes left, so perhaps it will all be explained in good time. All I know is that I will be one of the millions tuned in to TLC this Wednesday night at 10/9c! You gotta redneckognize y’all!

Brad Ferro Mug shot: What happened to the guy who punched Snooki/Snookers? Did he lose his job?