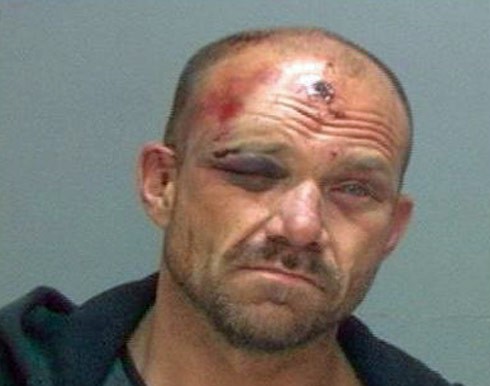 A Utah man who is accused of attempting to force his way into a home by impersonating a police officer was beaten, handcuffed and detained by the homeowner until the actual authorities arrived.

According to a police report obtained by KSL, 42-year-old Reed Grover knocked on the back door and “showed a police badge through the house window and said, ‘Police!'” Grover failed to procure a uniform for his criminal charade but he did bring along some handcuffs and a toy police badge.

The three people inside the home weren’t buying what Reed was selling as the burglar attempted to break in. One of the occupants fought with Reed (as is evident from his booking photo), procured the handcuffs and used them on the criminal to subdue him.

When actual police with non-beaten faces arrived, they found Reed handcuffed and waiting in the driveway.

Reed was arrested, taken to a hospital to receive care for his wounds and is under investigation for impersonating a police officer, burglary, parole violation and assault.