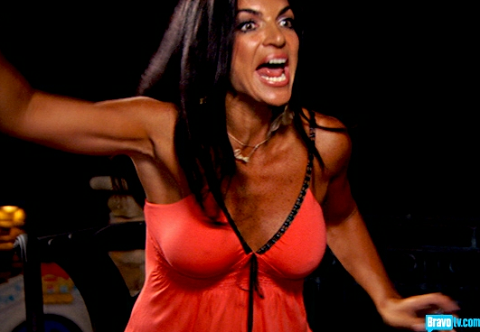 Teresa Giudice lost a couple of friends on Sunday night’s Real Housewives of New Jersey. Jacqueline Laurita and Caroline Manzo cut ties with her after several months of strained relationships. Teresa’s tabloid drama had been weighing on everyone and left them wondering what really is going on with her. Also causing drama? Melissa had not only joined the show behind Teresa’s back, she had used Danielle Staub to do it!

Jacqueline and Teresa’s relationship first became strained when Teresa announced plans to renew her vows with Joe after Jacqueline had planned to do so first. Just weeks after telling Teresa of her plan, she found out about Teresa and Joe’s vow renewal on the cover of In Touch Weekly. Jacqueline was hurt by Teresa’s decision and never ended up going through with her own vow renewal because of it. She also admitted to feeling as though Teresa had stolen the idea from her, but Teresa denies it in her Bravo blog saying, “Jacqueline wasn’t asked to renew her vows for a magazine.” Teresa  adds that at that time, rumors were circulating that she and Joe Giudice’s marriage was on the rocks. “I was asked to address them with a vow renewal in a magazine. I thought it would be a good thing to let my fans know we were OK.” The cover read, “A Wedding To Save The Relationship.”

When it comes to Jacqueline and her husband’s offer to buy the Giudice’s stuff at auction to help them out, Teresa isn’t grateful. In fact, she thinks they were doing it to make themselves look good in the tabloids! Teresa explains, “For one, they know we would never take help from our friends. Joe would work 10 jobs before he ever took money from a friend. For two, it’s an interesting offer coming from someone with his own financial issues. For three, it’s sounds fairly illegal to me, and we’re not into that. And four, if it was really an honorable offer, it would have been done discreetly, not on camera and leaked to the press.”

Although she had been quite close to both Jacqueline and Caroline, Teresa isn’t sitting around crying about their friendship’s ending. She admits, Jacqueline “is a really hard person to be good friends with because she is so unstable and moody.” Regarding Caroline, she says, “Caroline is just full of crap, plain and simple. I have nothing more to say about her.” Jacqueline and Caroline seem horrible, according to Teresa, I’m not sure why she was friends with them to begin with if she felt that way.

“I knew Melissa joined the show behind my back with what I think are malicious intentions. I’m trying to work through it, but she’s giving me innocence and “Bravo just contacted me out of the blue.” Then I find out months later that Melissa had possibly sold her soul to the devil to bring me down.” That devil she is referring to would be Danielle Staub who you surely remember from Real Housewives of New Jersey seasons 1 and 2. Melissa had reportedly contacted her in an attempt to dethrone Teresa from the starring role in the show although nothing she denies it — so far.

Regarding Sunday’s new episode, Teresa teases, “You’ll see in the next episode that Melissa makes a surprising confession, and my brother and I come to an unexpected agreement.”

CLICK here to read how Jacqueline claims that the rumors that Joe cheated on Teresa were true!

RHONJ alum Lauren Manzo is pregnant with her first child