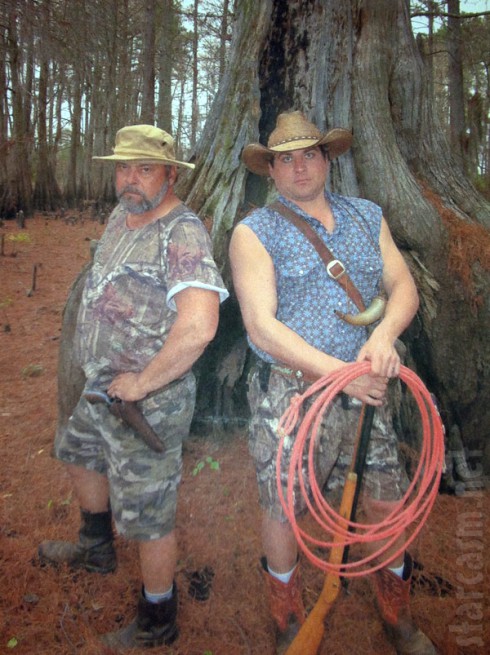 David LaDart and Jeromy Pruitt are Louisiana boys through and through. This stepfather/stepson team from Monroe, Louisiana is moving into Molinere territory to do their hunting this season. And, if you thought using an airboat or a treble hook was edgy, these guys are going to show you a thing or two.

What makes them distinctive, according to their History Channel bio, is that they don’t just go for the gators with rancid chicken and a rifle. They have a whole arsenal of weapons and bait to use, and they don’t let themselves get into a rut.

The Molinere’s should respect Jeromy and David’s creativity. RJ and Jay Paul have a definite rhythm to their hunting style, but they know how to break out of it now and then, too. Just last season they spent a little time getting in touch with their Native American roots by hunting for gators using old-fashioned Houma Indian techniques. 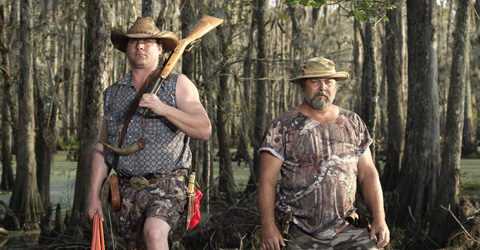 One thing we know is that Jeromy has been know to do a little catch and release gator hunting. Not since Terrell Evans was on the show have we seen anyone pull in a gator without putting a bullet in the back of its head. The newest History Channel Bio says that Jeromy and David “have been known to wrestle and lasso some of the biggest gators in Louisiana.” It also says that they have permission to hunt gators in a nature preserve, where you know they’ll be doing catch and release work. We’ve seen Terrell use a lasso, but wrestling gators? That would be new . . . and crazy.

David LaDart is a bit of a mystery, at least so far. We know that he’s Jeromy’s step father, and that he and Jeromy use unconventional strategies to fill their tags, but that’s about it. I guess we’re just going to have to tune in on Feb. 14th to get to know him for ourselves!

Here’s the text of the most recent bio from the History Channel:

David LaDart is Jeromy Pruitt’s stepfather and taught Jeromy how to hunt gators. The guys have been known to wrestle and lasso some of the biggest gators in Louisiana. Jeromy has been granted special access to hunt on a local nature reserve and is determined to set the state record this year.

Here’s what was first released on these new guys:

Jeromy Pruitt and David LaDarte from Marion, LA are a stepfather/stepson team who are some of the most creative (and quirky) hunters on the swamp. Using all sorts of unconventional bait, boats, and ammunition has put this pair at the top of the list of Northern Louisiana hunters. The two are determined to hunt down “The Beast Of The East,” a legendary massive gator.

And here’s a promo video for Swamp People Season 4 where you can catch a quick glimpse of David and Jeromy getting their gear ready (while getting stared down by Rj and Jay Paul!).

The fourth season of Swamp People is set to premiere on Thursday, February 14 at 9/8c on History. (Yes, that is Valentine’s Day. Looks like roses, chocolates, and alligator hunting y’all!)