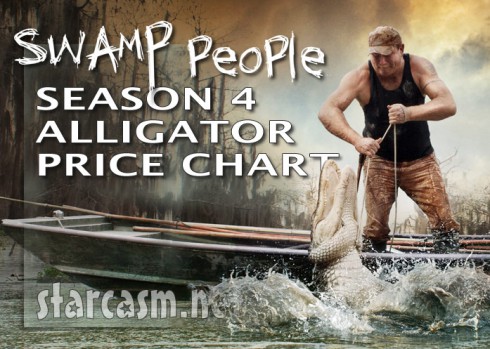 Many of the alligator hunters on Swamp People will tell you that they love to live off the land. We’ve seen great sequences that start with the Guist brothers sitting on the porch feeling hungry, proceed to follow them as they track down dinner in the swamp, and end with them cooking up what they’ve caught. The Edwards family’s slightly more sophisticated version of living off the land involves frying up alligator or frogs or some other critter that Willie has pulled out of the river. Liz Cavalier has even given us a tour of her freezer, which is full of what she’s taken from the land and plans for her family to live on.

But, if living off the land includes buying gas for your boat and boots for your feet, not to mention a cell phone, then you have to take what you’ve hunted on the land and sell it on the open market. Regardless how much more self-sufficient these Louisiana sportsmen are than most of the general population, it is still 21st century America, and market prices still matter to them . . . a lot.

Right before Swamp People premiered in 2010, the market price for alligators was way down. Many of the members of the Swamp People cast, including Troy Landry, have mentioned over the years that they might not have been able to follow their family’s alligator hunting traditions if the show hadn’t come along when it did. The work is just too time consuming, expensive, and dangerous to do it without a profit, even if the season only lasts a month.

The popularity of Swamp People isn’t the only good news that came to the swamp after the 2010 season, the prices for alligators started going back up. And, based on this year’s prices, it looks like the market is still moving in the right direction.

In our Season 2 story on alligator prices, we reported some rough market prices. At that time, a 7-9 ft wild gator went for $12-$15/foot and one that was 10+ feet brought $13/foot. These numbers were way down from the highest prices the market hit in the late 80’s when a 10+ foot gator could sell for $40/ft. No wonder the hunters were having to rethink their traditions.

By Season 3 of Swamp People, which was filmed during the 2011 alligator season, the prices had gone way up, and we reported on them in a lot more detail. 7ft gators still brought in $14/ft at market, but 8 ft. gators sold for $22/ft, and those over 9 feet went for $26/ft. 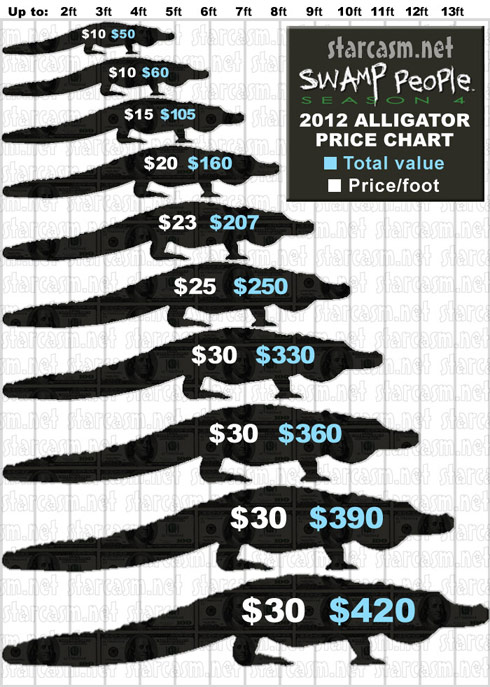 Now, to see who was actually able to haul in some of those $30/ft monsters, be sure to tune in to the Swamp People Season 4 premiere tonight at 9/8c on History! After that, episodes air every Thursday night at 9/8c. Oh, and in case you missed it, the fourth Season of Swamp People will be introducing fans to a slew of new gator hunters — you can meet each team in our profile posts:

Special thanks to Jeromy Pruitt for help with this article.