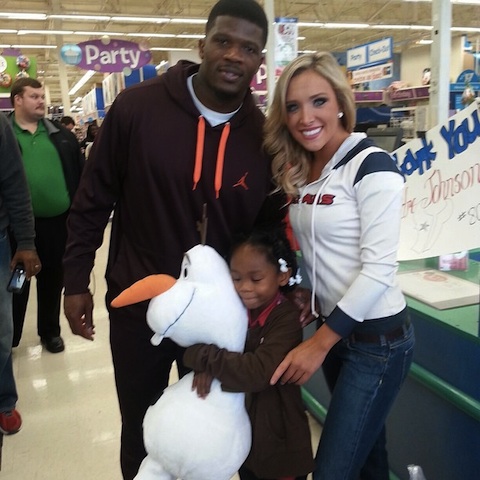 Houston Texans’ wide receiver Andre Johnson is the most prolific receiver in team history, and one of the greatest the NFL has ever seen.

He’s spent his entire 12-year career in Houston, wants to stay with the team until he retires, and clearly thinks a great deal of the city.

One way Johnson demonstrates his love for the community? Every December he takes a gaggle of underprivileged children to a local Toys ‘R’ Us, and lets them run completely loose. For 80 seconds, the kids go nuts, filling shopping carts with whatever they want.

Then, Johnson foots the bill.

Kids were able to run through the store and grab whatever they wanted.

The original idea, Johnson says, came from his Uncle.

He was like, ‘Give ‘em 80 seconds to run through the store and let ‘em just get what they want.’ [Johnson’s jersey number is 80, which is where the 80 seconds come from.] And I was like, ‘That’s not enough time.’ And he was like, ‘They can grab a lot. So we did it the first year and when the kids came back, I was like, ‘Wow, I didn’t think they could grab that much stuff in that amount of time.’ he said. So we just rolled with it from there and we just kept doing it every year.

Though that’s not even the full story: In addition to the 80-second spree, Johnson gives every child a gaming system, plus gifts for any brothers or sisters they have.

This year’s edition of the Andre Johnson Shopping Extravaganza cost $16,266.26. How much is that? Enough that Johnson’s credit card stopped payment on the first register’s $5,000 tally, thinking something suspicious was afoot.

Johnson had to call the company and confirm that, yes, he really was dropping five figures at a toy store.