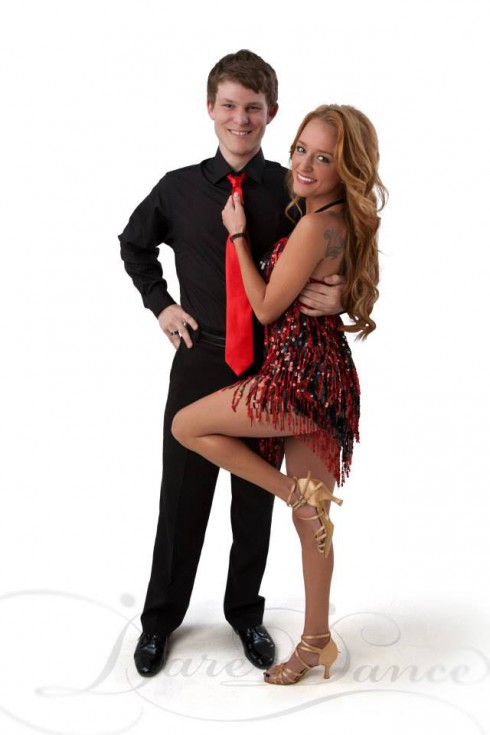 Former Teen Mom star Maci Bookout is putting a lot of time and effort into helping out The Kidney Foundation of the Greater Chattanooga Area. On August 29th she and son Bentley hosted a fundraising bowling event in which folks who donated $20 got to bowl with Maci and Bentley for two games, and on September 14 she will be participating with partner Chris Holt (above) in the annual Dare to Dance competition, which is essentially Dancing with the Chattanooga Stars.

But, unlike DWTS, Dare to Dance is a bit rigged in that you can help sway the judges’ scores (how much is unclear) by donating some payola to your favorite couple via FirstGiving.com! Also, the Top 3 fundraisers will be receiving People’s Choice trophies — and you know Bentley wants momma to bring home the biggest trophy y’all!

Each of the seven couples competing (one local — or in Maci’s case, national — celebrity paired with a trained dancer) set a goal of $5,000, and three of the couples have already reached that goal, including Maci and Chris. But, Maci and Chris are currently in third place with a total of $5,083 raised so far, which puts them behind Kelly Proctor and Daniel Lineberger ($7,824) as well as Bryan Hoss and Irene Barels, who have raised a whopping $10,025 as of today!

So let this post be a virtual Rally Monkey for Team Maci and Chris! Heck, if each of her 1.2 million Twitter followers just gave a dollar… 😉

Click here to see some behind-the-scenes pictures of Maci and partner Chris posing for the Dare to Dance photo shoot!

As I mentioned above, the actual competition is September 14 and from what I understand you can donate right up until dance time. Unfortunately, they don’t usually record the competition, so if you want to see Maci doing the Charleston, the Foxtrot, and/or the Jitterbug you’ll need to buy a ticket and attend the event in person. To get a ticket, or if you have any questions about the event like what to wear, just visit daretodance.kidneyfoundation.com

Here’s a little “About the Event” from its First Giving page:

The event will be held on September 14, 2013 at the Chattanooga Convention Center. Doors will open at 6:00 p.m. with performances beginning at 7:00 p.m. Attendees and local judges will be entertained by some of the smoothest and vivacious moves and have the opportunity to vote for their favorite. The evening will conclude with the grand reveal of the Dare to Dance 2013 Grand Champion, which kicks off the after-party.