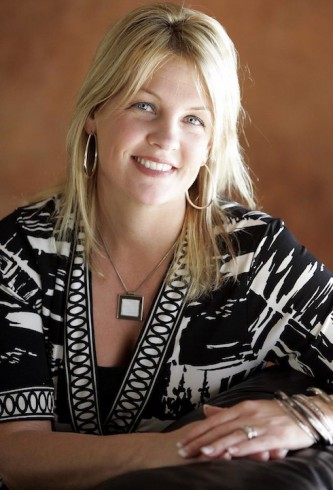 During a recent episode of Guy’s Grocery Games, celebrity chef Guy Fieri shocked viewers by bringing out a very special guest to help with one particular competition. Guy’s Fieri’s wife Lori was on hand to play checkout clerk for the three remaining contestants–and to undo his carefully-laid plans by throwing a little muck to the wind, in favor of the mothers competing on Mother’s Day. Here’s a look at Lori’s quick appearance:

As Guy noted, this was the first time that Lori has appeared on Guy’s Grocery Games. But it’s more than that–Lori’s appearance on Triple G was the one of the few times she’d been on-camera on any of Guy’s many television shows. (A 2010 appearance on the Valentine’s Day episode of Diners, Drive-Ins, and Dives appears to be the next most-recent.)

Before that, she was probably best-known to most of Guy’s fans (and his critics) as the woman with whom Guy’s hairdresser got loaded on a cross-country flight before Guy and the hairdresser had their infamous dust-up.

Lori, 44, has been married to Guy for 20 years. The pair has two sons together–Hunter, who is eighteen years old, and Ryder, who is nine. Lori grew up blue collar, in North Providence RI, the daughter of a housemaid mother and toolmaking father. She met Guy in 1993, when she was 22 and he was 25, and a chance visit to California brought her in contact with the goofy manager of a restaurant her friends took her to.

The pair’s lives together really began to change, though, in 2006: when Lori encouraged Guy to send a video of his bold cooking and saucy ways to the Food Network. The network was auditioning for The Next Food Network Star, and Guy sent the tape off on a lark, never expecting that he’d get an invitation to New York for a shoot.

When the invitation did come, it was nearly Christmas, the family had bills a-plenty to pay, and Lori was pregnant. But, according to her, Mrs. Fieri didn’t even flinch: “I said, ‘Listen, this is the opportunity of a lifetime. If you don’t try, you’ll never know. You need to go.”

Four months later, Lori and her two sons were standing onstage with Guy, watching Emeril pull her husband’s name out of the winner’s envelope. “If I could go back and relive that whole experience again, I would,” she’s since said. “It was such a high.”

As for the change in their lives in the wake of Guy’s victory–especially when she takes into account her husband’s hectic filming schedule–Lori says she’s learned to deal with life as a full-time mom who’s also often alone:

I miss him. The kids miss him. That’s no secret. Is it hard? Yes. I try to be really careful to not be too sad. We chose this for our family right now….[But] he’s always been Guy. It’s not like you took a hermit couch potato and turned him into a rock star….We’ve always had the same obnoxious friends. He’s just taken it to the next level.

One thing that has changed? The couple now keeps two refrigerators–one for family meals, and one for “insane ­sriracha-infused whatever [Guy is] whipping up.”

Lori and Guy both acknowledge that their endgame is to retire to the piece of beachfront property they own in Mexico, and open up a small restaurant there. For now, the six restaurants they own Stateside (plus Guy’s three TV shows, and the fact that their youngest is still only in second grade) will keep their hands full.

How many restaurants has Diners, Drive-Ins, and Dives visited?