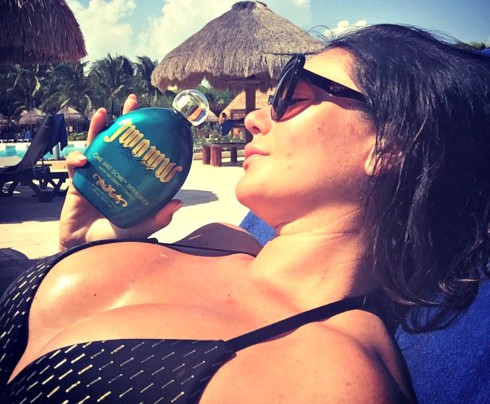 JWoww spent the last weekend gloriously (mostly) off the grid at a private resort in Mexico, where she was celebrating a friend’s wedding. Unfortunately, during that time, another guest took some photos of the new mom lounging by the pool and sold the images for distribution.

In one set of photos, she was mercilessly mocked by a website for showing her “cellulite-ridden rear end” and “lumpy, dimpled caboose.” Thankfully, most people in the comments came to the defense of the former Jersey Shore star–and women in general. However, the rude comments still got through to JWoww when she logged back online.

“I want to sit here and say that I’m embarrassed by these pictures but honestly I’m not,” she said in the caption for a collage of the pictures. “I’m a new mom that loves to work out but also loves food as well.” JWoww added she was having “the best time of my life” with her fiancé and daughter by the pool when the pictures were secretly taken.

“At the end of the day I am not perfect and neither is my body,” she said. “And to make it worse someone decided to sell even more awkward photos of me on vacation with my family. So tabloids can get a nice laugh and write mean things.”

I just think it’s sad that she even had to defend herself: For one, she looks great by any standards, let alone for a woman who had a baby 10 months ago. What’s more, 90-freaking-percent of adult women deal with cellulite. It’s basically one of the biggest non-stories around.