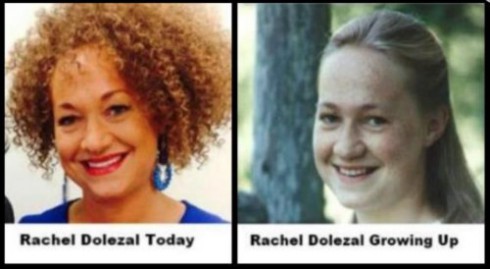 Rachel Dolezal, the leader of a local NAACP chapter in Washington, is under investigation after her parents came forward with claims and evidence that she isn’t actually black. In her application for Spokane’s Ombudsman commission, Rachel said she is black, white and Native American.

“There seems to be some question of how Rachel is representing her identity and ethnicity. We are definitely her birth parents. We are both of Caucasian and European descent — Czech, German and a few other things,” Lawrence Dolezal told The Washington Post.

He also told BuzzFeed News Rachel does not speak with him or her mother. He believes that is because she “doesn’t want us visible in the Spokane area in her circle because we’re Caucasian.”

Dolezal’s parents, who live in Troy, MT, say Rachel has been deceiving people. They want people to know the truth. pic.twitter.com/sS3aiUwD0H

Rachel does have two adopted brothers of African-American descent. One lives with her in Spokane, but the other condemned her actions to The Washington Post.

“Back in the early 1900s, what she did would be considered highly racist,” said brother Ezra Dolezal. “You really should not do that. It’s completely opposite – she’s basically creating more racism.”

Rachel earned her masters degree from Howard University, a historically black institution. In addition to heading Spokane’s NAACP chapter, she is an adjunct professor of African studies at Eastern Washington University. In her EWU bio, Rachel said she had been “met with opposition by North Idaho white supremacy groups, including the Ku Klux Klan, the Neo Nazis and the Aryan Nations, and at least eight documented hate crimes targeted Doležal and her children during her residency in North Idaho.”

Rachel largely dodged questions about her race when asked by the Spokane Spokesman-Review this week.

“That question is not as easy as it seems,” she said. There’s a lot of complexities… and I don’t know that everyone would understand that… We’re all from the African continent.”

On Thursday, Spokane’s mayor and city council president issued a joint statement about the situation.

We are committed to independent citizen oversight and take very seriously the concerns raised regarding the chair of the independent citizen police ombudsman commission. We are gathering facts to determine if any city policies related to volunteer boards and commissions have been violated. That information will be reviewed by the City Council, which has oversight of city boards and commissions.

Rachel was in the news in February when she said someone mailed racist and threatening letters to the Spokane NAACP post office box. That case is still under investigation, but Spokane officers concluded only the postal worker and box owner had access to it; they don’t believe the postal worker placed the package there.