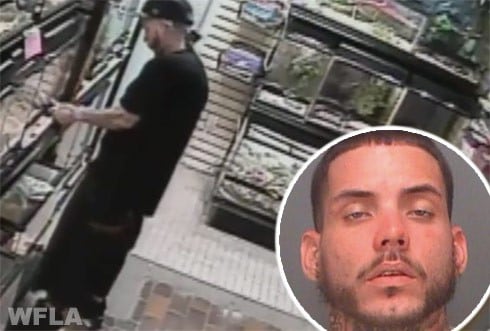 Pet store owners foiled the plans of a Florida man who attempted to steal a python by stuffing it in his pants in hopes of slithering out the front door undetected.

Pinellas County police said that Mr. Travis Treder made his way into Animal House Pet Center and tried to hijack the reptile by hiding it in his front pocket.

Store employees were on the lookout for Treder as he had pulled this same kind of snake shenanigan on prior occasions.  “He’s been in twice before over the past nine months and we didn’t realize he stole anything until after the fact… We waited on him for probably 15 minutes and then we went into the office to see what he was going to do, and sure enough, he targeted our higher-end snakes again.”

According to WFLA, they managed to prevent Treder from treading away by blocking the exit. A struggle ensued but eventually the pet store staff, with assistance from a customer who just so happened to be a security guard, wrestled him down and secured him with a zip tie.

The owner of the store speculated that Travis was making money by selling the stolen animals on Craigslist.