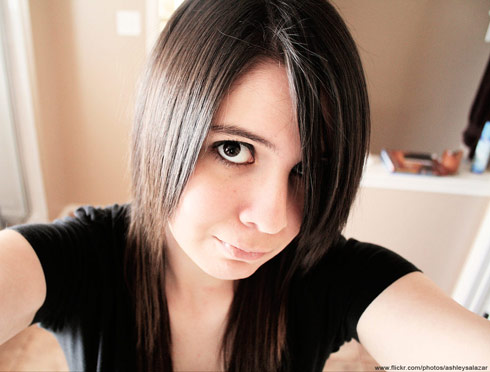 The season finale of 16 and Pregnant Season 2b featured the very emotional story of Ashley Salazar of McKinney, Texas who couldn’t seem to make up her mind whether to give her daughter up for adoption or not. Her decision was seemingly made easier when her Uncle Kenny and Aunt Lisa offered to adopt.

Although Ashley was committed to adoption there was something in her mannerisms that suggested reluctance, and that reluctance came to bear after young Callie was born and had been away from Ashley for only a short while, at which point Ashley changed her mind! (You can read all about Ashley’s emotional journey with excerpts from her blog in our profile post)

2. I love my DAD, my sister’s biological dad, but my grandfather had a heart attack and passed away before all this, so he had been down south, and it wouldn’t make sense if he popped up randomly in the show. You can find him in some parts, though 😉

3. I loved my show. It was way more emotional, but you can only show so many things in so much time.

4. Justin WAS filmed signing the papers, but for some crazy reason it didn’t make the show!

5. Rob from the Princeton Review is who I work for now! He is awesome and I am so blessed to have the opportunity to work with them! Love it

Ashley also posted a “thank you” to MTV on her blog in which she expressed how pleased she was on how the episode turned out, although she does suggest they trimmed a lot of the emotional stuff out, which seems impossible having seen the episode!

I am so happy with the staff / crew / friends at MTV. I am extremely happy with how they portrayed my story. I feel like it could have definitely been more emotional. There were parts where Justin signed the papers, my uncle cried, my mom cried alone following callie’s birth, i broke down in the bathroom once, other moments I lashed out an innocent parties in the family, and other dramatic moments that we all had to deal with in this process this past year. I am so happy for the massive amount of positive comments I have been getting. Here is a link to my page on MTV. Full show should be posted soon. Thank you again. I can’t thank everybody enough. This outcome was definitely better than what I expected. I feel like my real perspective of the show was hindered, because I judge every single moment. I am glad everybody liked it over all, though. I am forever grateful. I am blessed. Look out for other things coming soon.

I am going to see callie tomorrow. I will post again soon.

As an update, Ashley did in fact go to college in New York but she is currently back home in Texas for the holidays and debating on whether or not college in the Big Apple was the right decision. Poor Ashley! Hang in there girl, you know you’ll make the right decision eventually!

Here’s a bonus clip of Ashley putting together a scrapbook for Callie: