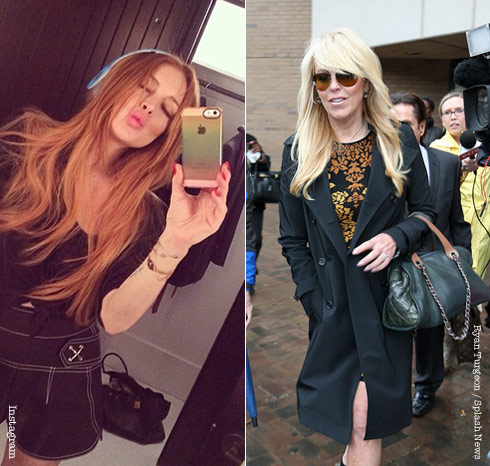 It’s a bad news cycle day for the Lohan ladies…

A week after Lindsay Lohan was seen admitting to relapsing on her OWN show with a “glass of wine,” the 27-year-old is alleged to have done so again while attending Coachella.

For this part of the Lohan double-shot you have to take the source into consideration as the report is coming from someone claiming to be an eyewitness who spoke with InTouch.

According to said insider this is what went down over the weekend:

“She looked completely out of it. She couldn’t stand up straight and she was frantically chain smoking cigarettes. In one of her hands she had a plastic cup with a clear liquid in it. The group was standing in a small cabana, booth type thing and one of the friends was making regular trips to the bar. I overheard the friend order four vodka sodas and when he carried them back to the group, he handed one to Lindsay and she started drinking it. She didn’t seem to care who saw and none of the group seemed concerned.”

Coachella probably isn’t the best place to hang if you’re fighting to stay sober but then again these allegations are all hearsay from an unnamed person. As for Lindsay’s mom – her part of this post is all fact.

Dina Lohan made her scheduled date at a Long Island, New York courtroom today for a DWI arrest that occurred back in September. According to NBC New York, Dina plead guilty to aggravated driving while intoxicated and speeding in exchange for no jail time.

Momma Lohan will have to forfeit her license for a year — after that her vehicle will be rigged with an ignition interlock so that she will not be able to drive if she’s had alcohol.

Dina Lohan was also ordered to pay $2,600 in fines, serve 100 hours of community service and attend a drunk driving program.

At the time of her arrest, she registered a blood alcohol level of over twice the legal limit.