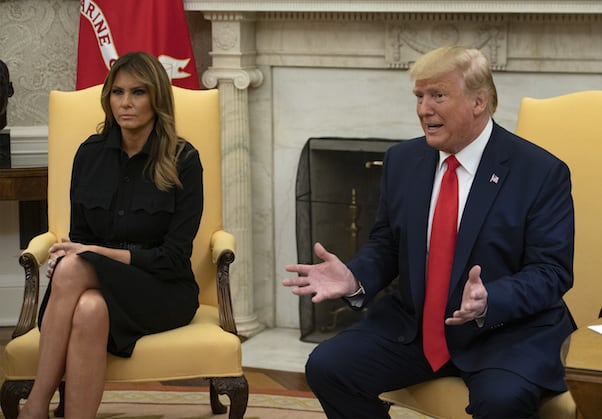 CELEBITCHY – With yet another weird slip of the tongue, Donald Trump gave rise to a tabloid- and SEO-friendly question nobody was asking the day before: Is he Barron Trump’s real father? Or did Melania get pregnant by someone else?

REALITY TEA – RHOA star Cynthia Bailey accidentally pulled out her real eyelashes while removing her false eyelashes in a big hurry. And yet, I have to agree with Reality Tea’s takeaway here: “In all honestly, she still looks better than I have ever looked. In my entire life.”

VOX – “The long shadow of ‘hot Jesus’: The Christ of my youth was benevolent and handsome. So why was I treated like the ungodly temptation?”

THE BLEMISH – “Modern Family developed a real problem with Ariel Winter’s Alex in later seasons, still playing her as an unf*ckable dork running around with nerdy losers because those were the only guys who wanted her. The problem, of course, is that we could all see she was insanely hot behind those thick-rimmed glasses, even after she had that breast reduction that took her chest down to ‘gigantic’ from ‘almost comically large.'”

JEZEBEL – There is a brand-new oral history of the 1994 Little Women and you need to stop what you are doing right now and go read it. (Except of course for reading and clicking on the links in this very article.) There are way too many incredible details for me to try to mention them all here; here’s one: Did you know that Claire Danes’ screen test was Beth’s death scene?!

THE ASHLEY’S REALITY ROUNDUP – Former Southern Charm star and current disgraced sexual assault accusant Thomas Ravenel got off pretty easy after pleading guilty to the charge of “third-degree assault and battery regarding accusations of sexual assault from his children’s former nanny.” Ravenel received a 30-day suspended jail sentence and a $500 fine

GO FUG YOURSELF – “THIS is why I want her to go on a prolonged awards run. Never stop, Jennifer Lopez. You are a walking mood board for a soap opera.”

LAINEY GOSSIP – Netflix’s new Meryl Streep film The Laundromat got plenty of hype leading into the Toronto International Film Festival, but it hasn’t come out the other side looking so good