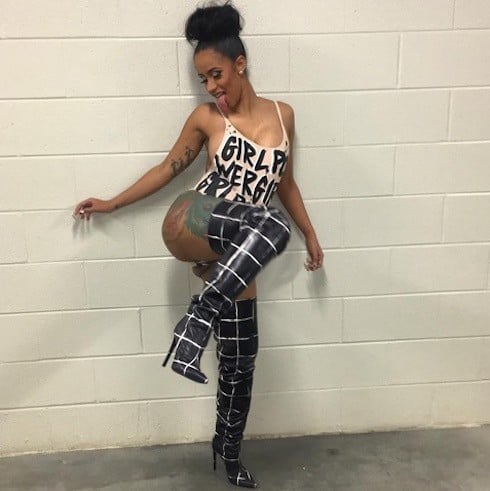 Cardi B and Swift have turned heads and raised eyebrows with their passionate lip-locking in Love & Hip Hop New York‘s newest season. The pair went all-in with a serious kiss during their time in the recording studio, leaving Swift with an appreciation of more than just Cardi’s vocal talents. But Cardi’s been taking heat on social media for her actions–specifically because Tommy, the love-of-her-life boyfriend with whom she planned a prison wedding last year, is still incarcerated. (Though it’s worth pointing out that Cardi also caught flak last season for saying she wanted to get married to Tommy in the prison yard. Haters gonna hate, even when you get brand-new teeth.)

So, in typical Cardi fashion, the woman explained exactly why she did what she did, and took to social media to do it. We’ve transcribed Cardi B’s Instagram comments after the video, but you know you want to hear her say it first:

You know, a lot of b!tches is like, “Oh my gosh–why would you kiss Swift back? Don’t you have a man in jail?” And it’s like…let me tell you something. Me and Tommy, we not together right now. But even if I was sucking d!ck and doing porn on TV, that n!gga still don’t care. As long as his commissary poppin’, he don’t give a f*ck. You b!tches is so worried ’bout, “Oh, what Tommy thinking.” But y’all not worrying about how Tommy eats. Y’all not worried about if Tommy got magazines or stamps to send letters. And even if I’m not with the n!gga, I’m going to be that b!tch that when he gets out, Imma put him get back on his feet. Not y’all. And that’s all he worried about. So if y’all wondering, there ya go!

Hopefully Mona Scott-Young can put together a big pile of money and throw it at Cardi to get her to stay on LHHNY, because wow is the show ever going to miss her when she bounces at the end of Season 7.

In the meantime, though, it looks like she might be getting ready to throw down hard with Swift, as rumors have it that he’s keeping at least one woman on the side while leading Cardi to believe she’s the only one on his mind. Those rumors are as-yet unconfirmed (though a quick glance at the synopses for upcoming LHHNY episodes proves there’s drama to be had); on Twitter, at least, Swift has nothing but praise:

Cardi's next mixtape is fcking crazy … We put double the work into this one ??????? watch when we drop it ! #gangstabitchvol2

RELATED ARTICLES: Did Cardi B fix her teeth? What did she have done?

Alexis Skyy and Rob Kardashian allegedly together: grand reality comeback in the works?