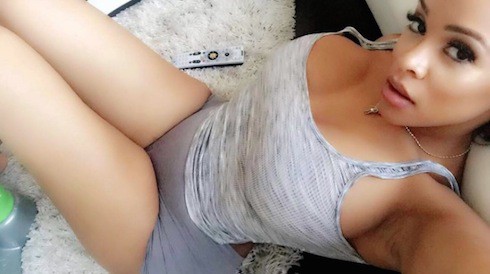 The Masika Kalysha baby daughter storyline has finally reached its climax on Love & Hip Hop Hollywood, and Masika herself has taken to Instagram to share a host of photos of little Khari Barbie Maxwell, including a few new shots! In addition, Masika shared the depth of her love for her daughter this week–and revealed that things between herself and Fetty have not been as easygoing as they’ve appeared on camera.

The Masika Kalysha baby daddy drama, according to the baby mama, is simple: Fetty lied about wanting to be a good father, and only acted like he felt that way when the cameras were turned on. That’s what Masika claimed earlier this week, following the pregnancy episode of Love & Hip Hop Hollywood. In response to stories from the previous week that Fetty was really trying his hardest, Masika had this to say:

Y’all tune in to #LHHH tonight to see my BD lying to my face again. Him so good at it ? Pretending that he wants to be a good daddy. ?

Dealing with this situation has been the most difficult thing I’ve ever had to deal with b/c it’s not about my feelings it’s about our baby.

Talking about this on tv isn’t easy. But with all the lies in the blogs I didn’t have a choice. There’s so much that I haven’t said and will

never say to protect my child. But understand that you only see and hear a small portion of what really happened between us. Regardless of

who’s right or wrong the only 1 who’s feelings matter in this situation is my daughters. I will always put her 1st & do what’s best for her

Masika then elaborated on Instagram, making it even clearer that she fully intends to do whatever is necessary to be a good mother for her baby daughter, no matter who else is–or isn’t–with her:

#tbm before all the drama before all the headlines and tweets and interviews… We were just 2 people enjoying life that ended up creating a life. Yes a VERY SMALL portion of our relationship is public but that’s not even 10% of the truth. Tonight’s episode was really emotional for me to watch. Reliving the day our daughter was born and all the emotions from this past year… Learning to forgive and move forward in a situation that changes daily is close to impossible. But I’m trying. We have a long way to go. But I’m going to continue being the best darn mommy ever and giving my little angel the entire world no matter what.

We were looking at her bicep. My kid was born with muscles. ??

Priceless moments I’ll never forget. While I fed my daughter my mommy feed me… everyday while we were at the hospital. And my dad held down the foot massages ❤️

I’ll never quit as long as she’s watching me…

“Let’s have a toast to the good life. Suicide before you see this tear fall from my eyes. Me and my baby we gon be alright… We gon live a good life…”

Everything I do I do for you ❤️

I thought I knew what love was but I had no idea. #KBM

The second I found out I was having you… My entire world changed. These past 9 months I’ve been so blessed to protect you as you grow and get ready to enter this world. It’s a cold world baby girl. But mommy and daddy will always keep you warm. I still can’t believe the miracle that occurs to create a life. But this my love is your official eviction notice. It’s time to give momma back her belly. I can’t wait to hold you… Any day now… #KBM

Who is the father of Love and Hip Hop Hollywood star Nia Riley’s daughter Kamryn?