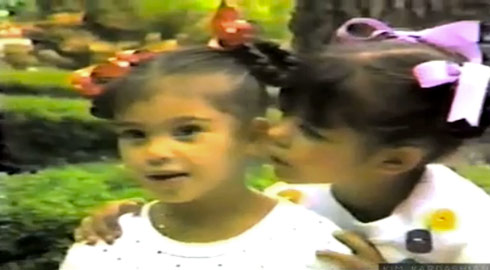 In addition to being a high profile attorney, Khloe, Kourtney and Kim Kardashian’s father Robert Kardashian was also a bit of a home movie buff, and thanks to the generosity of the Kardashian family a number of these clips are available to watch online!

All of the clips I could find were shot by Robert Kardashian and feature Kourtney Kardashian and her really little sister Kim Kardashian (seen above – Kim on the left) with a few appearances by their mom Kris. Here is a photo of the sisters dressed up for Halloween – Kim as a pumpkin and Kourtney as Wonder Woman. (Video below) 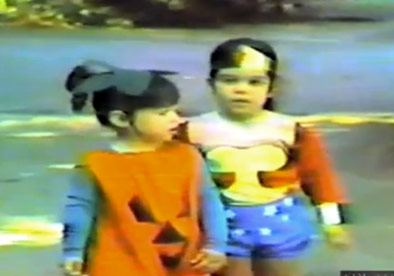 Most recently Kim shared an adorable video of her and sister Kourtney singing the song “Hallelujah,” during which both girls would kneel down and spring up, with their arms outstretched, for the chorus. Kim posted the video on her blog along with this message:

I found this home video of me and Kourt when we were younger singing Hallelujah and I had to share it with you guys. My dad would always be filming us! Not only would he make videos of our birthdays, first day of school and other special occasions, he’d also just film random moments like this… and I’m so grateful to him for making these memories last forever.

I went through and gathered up all the other home movies I could find, most of which were filmed right around the same time by dad Robert Kardashian and feature Kim and Kourtney. Watching all of these clips amounts to a brief prequel to Keeping Up With The Kardashians in which we get to see first hand what a loving father their dad was, and also how much Kris Jenner (Kris Kardashian at the time) loved helping her girls play dress up! Check out this video (which may be my favorite) featuring the sisters in Halloween costumes – Kourtney as a baggy britches version of Wonder Woman and Kim as a lil pumpkin:

Foreshadowing her eventual appearance on Dancing With The Stars, Kim Kardashian shows off her dance moves as well as how to eat a dress in this next video:

Not to be left behind, Kourtney also got in on the dancing! Here she is seen in her ballerina tutu along with sister Kim in a Minnie Mouse costume as they both dance freestyle to the tune of “Ghostbusters” by Ray Parker, Jr.

This next video must have been shot just prior to or just after the previous clip because it features Kim in her Minnie Mouse costume as the “Ghostbusters” theme song continues to play in the background. Mom Kris Jenner is in the Ghostbusters spirit herself, wearing a black t-shirt with the famous logo on the front. Robert Kardashian points out that his wife is sporting a lovely new hairdo, a look that may be familiar to you if you’ve seen Kris Kardashian’s AMAZING music video for “I Love My Friends!” (You absolutely HAVE to see that clip! It was made by Kris in the 1980s as a token of appreciation to her friends and family at the time and features a cameo by little Kim and Kourtney as well as numerous celebrity guest appearances – including Robert Kardashian’s most famous client!)

But singing and dancing wasn’t all these future superstars were capable of! They could also spin a good tale, especially for their dad on his birthday! 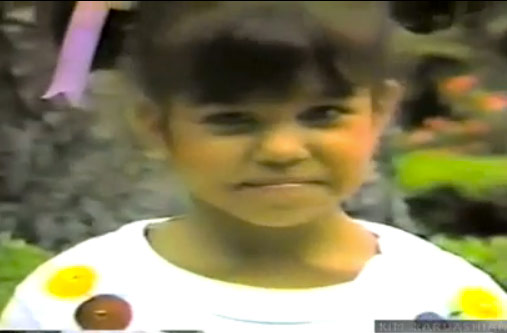 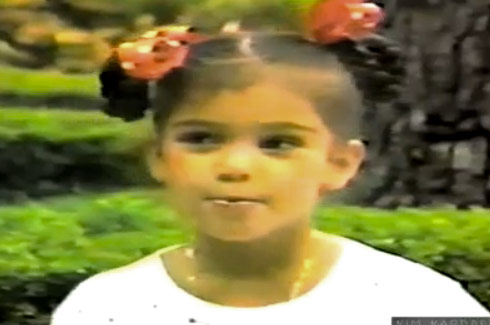 So what else can we add to the Kardashian girls’ list of talents that already includes singing, dancing and stroy telling? How about… horseback riding! Check out KIMosabi gettin’ her cowgirl on Annie Oakley style!

Thanks again to the Kardashian family for sharing these clips – we look forward to seeing more in the future, including some of lil sister Khloe!