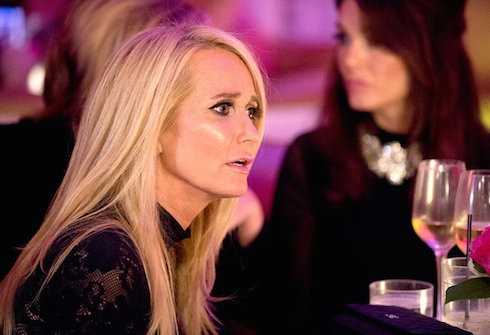 Throughout the past few years, we’ve witnessed Real Housewives of Beverly Hills star Kim Richards’ struggles with addiction — which have led to run-ins with the law and multiple rehab stays. Despite it all, Kim’s ex-husband Monty Brinson has been a vocal supporter. Most recently, shared an uplifting message for Kim on his Instagram page:

Things change and friends leave. Life doesn’t stop for anybody. You can’t stop the future, you can’t rewind the the past, the only way to learn is to press play. If people refuse to look at you in a new light and they can only see you for what you were, only see you for the mistakes you’ve made , if they don’t realize that you are not your mistakes, then they have to go. Some changes look negative on the surface but you will soon realize that space is being created in your life for something new to emerge. One day spent with someone you love can change everything. I’m proud of you my friend, you still have the same heart from the day we met. Always love Monty @kimrichards11 #wisdom #quote #thought #family #life #love #friend #blessed #thankful

Despite Monty’s positive message, there are new rumors Kim was illegally trying to obtain Xanax. According to TMZ, she was spotted inside an LA smoke shop multiple times trying to procure prescription drugs on the ground of a “foot injury” — even though Xanax is for anxiety, not pain. However, Kim seems to be ignoring the reports. After a hiatus from the public eye, Kim returned to Twitter with some casual messages for her fans. She even addressed questions about her sobriety: