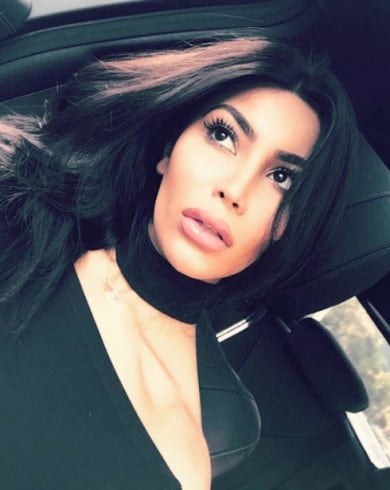 The “Does Kim Kardashian have a body double” question has found new life, thanks to a series of photos that appear to depict a slim Turkish model standing in for Kim while the Keeping Up With The Kardashians cameras roll. We first reported on the controversy a few days ago, as the story went wide; now, a new report and an update from the model herself appear to explain what was really going on. As always, though, unanswered questions remain.

Last week, model Kamilla Osman–pictured above–was spotted leaving the the Epione Cosmetic Laser Center in Beverly Hills with Kim’s pal Johnathan Cheban and a camera crew in tow. Kim herself was nowhere in sight–until later the same day, when photographers and eyewitnesses both saw Kim leaving the same building with a different man and no entourage. The woman with Cheban was definitely not his girlfriend, so that explanation was out; most fans (and detractors) assumed that the woman was supposed to be a television stand-in for Kim.

But that simply isn’t so, according to a Gossip Cop dispatch on the topic. According to their article, the whole controversy is “total B.S.,” and whose sources apparently went on to claim that there was never a Kim Kardashian body double to begin with. While it’s worth pointing out that Kris Jenner herself has acknowledged that Kim used a body double to model maternity clothes during her most recent pregnancy, it’s also worth mentioning that Kim’s most recent blog post says she’s dropped 42 pounds since giving birth.

Shortly after they were taken, Kamilla did share one of the alleged Kim Kardashian body double photos from the day in question…

…but it wasn’t until several days later, after the question “Does Kim Kardashian have a body double?” had re-entered the public consciousness, that she attempted to clarify the situation. This time, Kamilla shared a photo of herself and Kim, and claimed that the pair had merely been involved in shooting an episode of Keeping Up With The Kardashians together:

Look who I ran into the other day – @kimkardashian, we can’t wait for you guys to see our episode of #KUWTK and see what we were up to xo Kim is such a sweet person and so so gorgeous, my god! -Kami A photo posted by Kamīlla Ōsman (@kamiosman) on Mar 21, 2016 at 10:48am PDT

One thing Kamilla’s explanation doesn’t clarify, though, is why none of the photos taken of Kim leaving Epione show a camera crew. In addition, it’s not yet clear why the camera is shooting Kamilla from the back–speculation was rampant, when the allegations first emerged, that the model would simply be better able to double for Kim if her face were hidden.

So, it looks like we’ll just have to wait and see what happens in Kamilla and Kim’s episode. (Or, more specifically, how Kris Jenner chooses to edit the footage into the final episode. The conspiracy theory well is deep…)

(Photo credits: Does Kim Kardashian have a body double via Instagram)