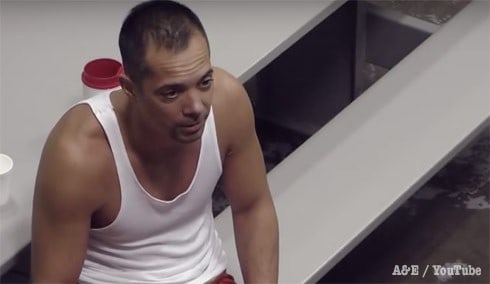 Robert Holcomb, a school teacher from Philadelphia, is one of seven cast members who voluntarily entered prison as part of A&E’s popular new docu-series 60 Days In.

The participants are there undercover so that local authorities can observe and learn firsthand about problems within the Clark County Jail. However, it turns out there was something Robert was hiding–and it came as a surprise to the man in charge of the operation, Sheriff Jamey Noel.

After the premiere episode, internet sleuths revealed that, earlier this year, Holcomb appeared on an episode of TLC’s defunct Extreme Time Cheater. Noel was none too happy about this news when he found out. He told the News and Tribune:

Noel emphasized that he had full control over the selection process, and added that Robert passed a background check and psychological evaluation. Noel said, “I didn’t want someone to come on the show and think it was a show about them. I wanted something that we can learn from and get that feedback.”

Holcomb also referenced his acting skills in a video on YouTube. He did go on record to say that his experience in jail was very much real and that he was, by no means, an actor. “I did try acting years ago but I’m not an actor. I’m not interested in acting. I’m interested in teaching and helping children, that’s my goal,” he said.

VIDEO Mother leaps on subway track to save toddler in stroller