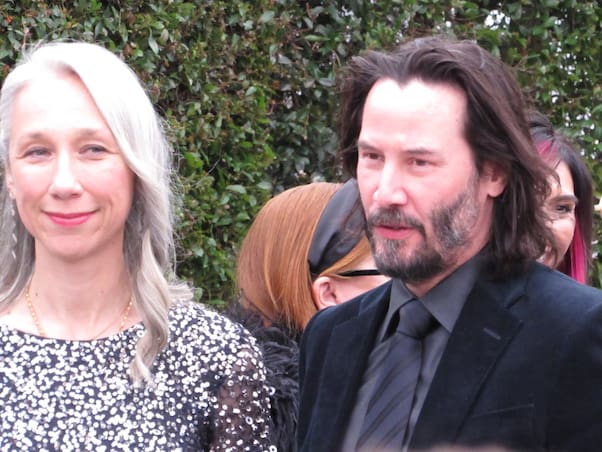 CELEBITCHY – Everyone is swooning over Keanu Reeves new girlfriend, a 46-year-old artist (and business partner of Keanu’s) named Alexandra Grant. I only mention her age because Keanu is getting showered with praise for dating someone roughly his age (she’s still nine years younger than him, but they’re both “old” by entertainment industry standards). It turns out the two of them have actually been together for months; the photo above was taken in May

THE BLAST – John Stamos flubbed the end of his song during The Little Mermaid Live last night and now the big question is whether he did so accidentally or on purpose. Though he’s not the first person to make a Freudian slip involving Prince Eric and Prince Albert (Grimsby was definitely the first)

REALITY TEA – Below Deck star Abbi Murphy is married to her “f*ck buddy” Captain Patrik after he proposed to her in a text. The engagement only aired on the show last night; afterward, Abbi confirmed that the two of them really get married on the DL — congrats!

VOX – Here’s the deal with James Turrell, “one of the world’s greatest quasi-spiritual artists” and the man whose aesthetic Kanye West has been borrowing from more and more ever since Kanye started his born-again phase

THE ASHLEY’S REALITY ROUNDUP – “A Very Merry Cavallari Holiday Special is Coming to E! in December; Very Cavallari Returns in January: Check Out the Season 3 Trailer”

THE BLEMISH – Motley Crue are so busy taking weak tabloid shots at each other that they’re blowing a chance to earn $150 million on an extended reunion tour. Though apparently one of the conditions of the deal is that Vince Neil get back into shape, which, good luck

DLISTED – Speaking of unexpected 80s throwbacks, Pamela Anderson is just happy to have people talking about her this much in 2019, even if it is for wearing and then trying to defend the classic ill-advised Halloween costume