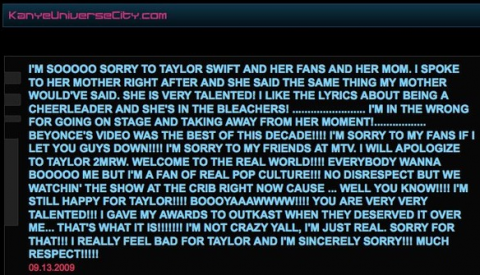 Kanye got out his caps keys to sort of, not really apologize for absolutely ruining the VMAs for Taylor Swift last night. It sounds like this apology was not driven by his remorse, but by the tongue lashing he got from Taylor Swift’s mom. He goes on to proclaim his love for Beyonce’s video and doesn’t mention that Beyonce’s video actually won Best Video of the Year last night. He also forgot to apologize for Beyonce for bringing her video into his televised meltdown, and then leaving his mess for her to clean up.

He even tells Taylor, Taylor’s mom, everyone else in the world ” WELCOME TO THE REAL WORLD!!!!!!” I think he should be telling himself that, because in the real world sometimes the videos you want to win at the VMAs don’t always win. Also, Kanye, in the real world, when the video you want to win doesn’t win, and you walk out on stage and snatch microphones from those who do win, there are consequences. Those consequences include but are not limited to the following:

Here’s the deal, in case you missed it: Kanye showed his ass at the VMA’s last night when he snatched the microphone in mid-acceptance speech from Taylor Swift and proclaimed Beyonce’s video as the best video in the whole world! He should have just pulled down his pants and taken a dump on the stage. That would’ve been easier to clean up.

This is exactly what he said:

You know, maybe I was being naive, but I’ve kind of half not cared about his grandiose theatrics up until this point. He would act a douche and I would be appalled but secretly enjoy it in that black part of my soul that allows me to like reality T.V.

But what happened last night wasn’t even trainwreck quality. Trainwrecks are something you can’t not want to watch because they’re fascinating. Kanye snatching the microphone out of a talented young woman’s hand in the middle of her acceptance speech and then bringing another talented lady into the mess was just gross. It wasn’t entertaining.

Taylor handled herself with dignity even though she’d just been more than slapped in the face, and Beyonce acted with class when she invited Taylor back out to “have her moment.” It’s sad that the two ladies were left to clean up the mess Kanye left.

Kanye has obviously learned nothing from his own mom, Taylor’s mom, or South Park.