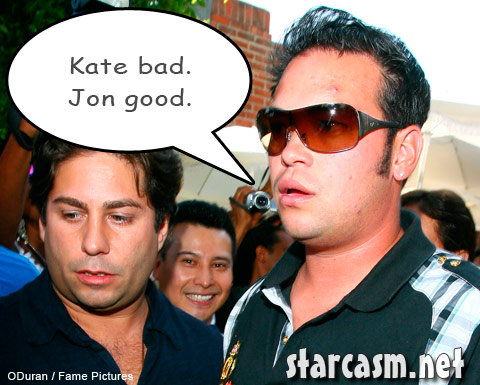 Jon Gosselin sat down for an exclusive interview with popeater.com, during which he addresses his ongoing divorce battle with Kate and TLC as well as the effects all of this is having on their eight children.

Most of what Jon has to say is the same stuff he’s been mumbling about on the TV shows over the last week-and-a-half – apologizing for past mistakes, complaining about how much TLC hates him, how the media is painting him as a bad guy when he’s really not and how the show is all-of-a-sudden having a negative impact on his children.

It might be obvious I’m not a huge fan of Jon Douchelin, but I will have to admit he is able to argue his case a little better in the written format than sitting in an interview with Sleazebob Lawyerpants or across the table from pitbull Nancy Grace. He’s able to calmly argue his side of things without getting interrupted and his language is devoid of all that weaselly spin-doctor stuff from his lawyer.

Here’s a question and answer from the interview:

Are the kids in good spirits for the most part?

Yeah, they’re fine. They’re not oblivious to what’s going on, but we’re keeping them sheltered the best we can. It’s getting kind of dirty right now, which I don’t like. That’s why I went on TV and said ‘Let’s settle this.’ She [Kate] doesn’t talk to me. She doesn’t want to talk, but I don’t want to embarrass her. I want the best for my family, kids and myself. She makes these claims about me and taking all that money. I have the proof … Bank statements, I have all that. I didn’t take all that money she said I took. It just makes her look bad, really.

And here are some of his comments about how he and Kate managed to swap black and white hats over the last few months:

I really messed up in my communication with Kate. I don’t know if the marriage could have been salvaged or not, but TLC had a major role in that. I said a lot and they edited it out. It’s always good cop, bad cop. Good cop good cop never sells. First, Kate was bad cop and I was the good guy, then it switched in the tabloids and then on TV.

Read the entire interview over at popeater.com!

BEFORE THE 90 DAYS Sean’s ex Abby moves on, is now dating another American businessman