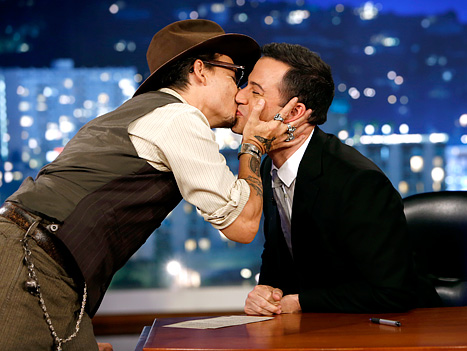 Jimmy Kimmel, like everyone, couldn’t get over an overwhelming attraction to Johnny Depp. Thankfully for him, the 50-year-old Lone Ranger star had mutual feelings.

During last night’s show Jimmy was gushing over Johnny, “You know, you have this very handsome, this … let’s be honest and say beautiful — face,” and couldn’t finish his sentence before Johnny went in for the kill:

“That’s more kissing than I did in all of high school!” Kimmel joked during the afterglow. “I never realized this Supreme Court decision would have such an immediate impact on both of us.”

“I do have a thing for talk show hosts,” Depp quipped.