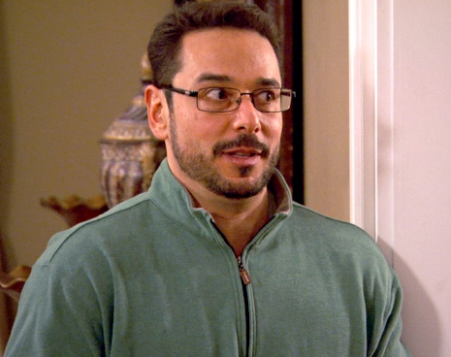 Jim Marchese is making some waves on The Real Housewives of New Jersey with a few comments about why he doesn’t want to get to chummy with Joe Giudice, who is currently awaiting sentencing on multiple federal fraud charges, including mortgage and bank fraud. Find out what Jim Marchese actually does, and all about the massive whistleblowing case he was once involved with.

First, here’s what happened between Jim Marchese and Joe Giudice. A few episodes ago Jim expressed a desire to not hang out with Joe Giudice and Joe Gorga because they had a reputation for fighting, and he also brought up the fact that he works in the mortgage industry and Joe Giudice is currently being charged with mortgage fraud, so he probably shouldn’t hang around the Giudices.

Word got back to the two Joes and Teresa, who did not appreciate Jim not wanting to be around them. Things came to a head, and Jim told Joe Gorga at a party, “I work with the same f**king attorney general that is prosecuting your brother, you dumbf**k.”

Reality Tea contacted Jim about this, and he had a lengthy response:

“I did not lie. Everyone is assuming from the promo that I was working on Joe Giudice’s matter, but that was not what I stated, nor was that ever the case. I am working with the Assistant United States Attorney in New Jersey on a totally different mortgage Fraud case. However, there is only one District of New Jersey for the DOJ. I am not prosecuting any mortgage fraud cases, as that is the Department of Justice’s job not a civilian. However, the DOJ on occasion requests assistance from civilians in prosecution of criminal matters. It is in this capacity, that I am working with them. As a trial is scheduled later this year I am not at liberty to discuss details of the case. There are two primary DOJ offices in New Jersey that I am aware of: Newark and Camden. I was recently asked to the Newark office to discuss the case involving a mortgage fraud indictment and up-coming trial which impacted my company. My company was named as a victim in a criminal matter involving a group of individuals who have been indicted for mortgage fraud, among other things. I wish people would watch the episode before making unfounded statements on the internet.”

He continues, “As for the episode: When I was speaking with Joe Gorga, I was trying to explain that I am working with the DOJ in NJ on a mortgage fraud case for my bank. I did not want to discuss any matters regarding his brother-in-law because it was my understanding the DOJ’s Newark office was prosecuting his brother-in-law. I used the term AG because Mr. Gorga did not know/understand the reference to AUSA. In plain English; The Department of Justice “District of New Jersey” that is prosecuting a case for my which my company is also working on Joe Giudice’s matter. I was trying to protect Mr. Giudice’s family and mine. I did not believe it prudent to have private discussions between Joe Gorga, Joe Giudice and myself until their matters were resolved. I did not know what would be discussed. Any fool can understand the gravity of the situation and that I was trying to avoid a potential harm for all. “

Jim is the CEO of his company, MortgageNow, Inc., which, as the name suggests, helps people get quick mortgages. His wife Amber Marchese and his family stars in commercials for the firm.

Now, while the debate raged about Jim’s proximity to the whole Giudice fraud mess, it came to light that Jim was involved in a huge fraud case about 8 years ago. After being fired from a company called Cell Therapeutics, he filed a suit, and was later joined in the suit by the federal government against his former employer for defrauding Medicare out of money as part of a cancer drug scam. According to a long New York Times piece, the government eventually accused Jim of being the mastermind behind the whole Medicare scam, and asked that he not get the standard whistleblower’s share of the judgement. Cell Therapuetics agreed to pay $10.5 million for the fraud, with $2.8 million going to Jim, but in the kerfuffle Jim walked away with $1.6 million. His ex-girlfriend was working with the government in the case against him, she reportedly had documents that he wrote claiming to have come up with the scheme for the company.

“First, I was never on the wrong side of the law,” Jim told Reality Tea about this matter. “The Department of Justice (here after referred to as “DOJ”) paid me over million dollars for my assistance. The egregious wrongdoing in the Seattle case was it took the Federal prosecutors in Seattle 6 years to prosecute Cell Therapeutics case and that they were so greedy that they misrepresented facts to the court in a poor attempt to try to keep all the money. The Court agreed with me and I was paid accordingly. Without my assistance the DOJ with all of its money and people would not have had a case and people would be dying today from that drug. The founders of this great country created a separation of powers and the Court system provides a check on the greed and ensures justice. Sometimes, the citizens of this country need protection from its government. ”

Just to further complicate matters, Jim’s ex-wife Rebecca Grande had plead guilty to mortgage fraud. It looks like Jim is no stranger to the messy legal matters involving fraud.