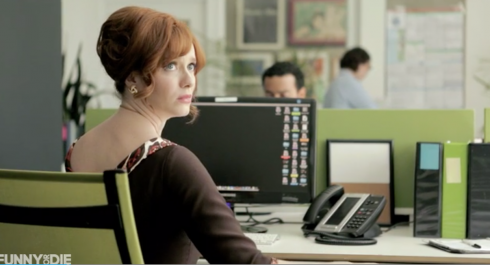 In this Funny or Die video Christina Hendricks’s Joan Holloway-type character from Mad Men seems to have found herself in a modern day office. She goes about her day with poise and aplomb smoking cigarettes in the office, mixing martinis at break time, and digging into a jello mold at lunch. Modern office gadgets pose quite a threat to Christina’s sanity, but she still doesn’t break a sweat. When she’s finally confronted with her lack of knowledge about the modern world, she lays down the law with some startling statistics about the difference between wages for men and women.

Modern Office with Christina Hendricks from Funny Or Die

This doesn’t quite address the wage gap, but Christina recently said that her decision to play Joan on Mad Men got her dropped by her agency at the time. They told her, “‘It’s a period piece, it’s never going to go anywhere. We need you to make money and this isn’t going to make money.’ They ended up dropping me.” Christina and whoever her new management is are certainly laughing their way to the bank now.

Kris Jenner throwback ‘I Love My Friends’ music video from 1985