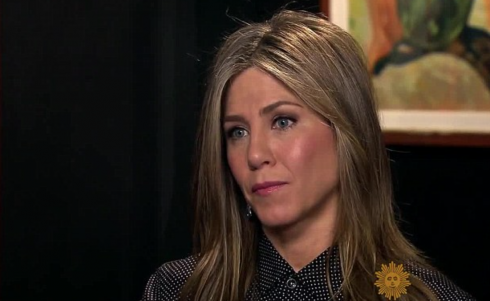 Jennifer Aniston’s highly publicized split from ex-husband Brad Pitt is a non-issue for her, even if it continues to be a big issue for fans and the media. In an interview about her raw role in the upcoming film

During an interview with Lee Cowan on CBS Sunday Morning, Aniston says she used to stress out over what was and wasn’t true in media reports about her. “And now I just think you have to let it roll off your back and you realize, I think everyone knows it’s all BS and, like, soap opera on paper.”

“I don’t find it painful, though,” Aniston said about being asked about Pitt. “I think it’s a narrative that follows you because it’s an interesting headline. It’s more of a media-driven topic . . . We’ve exchanged good wishes and all that sort of stuff to each other, but not a constant thing.”

Jennifer also said that she started acting in the first place in defiance of her dad John, who was also an actor, and didn’t want his daughter to pursue this life. “He didn’t want my heart to be broken. Maybe that was my rebellion – was, ‘Oh, yeah? I’m going to do that then. I’m going to try to be an actress.'”

After winning our hearts on Friends, and a series of romantic comedies, Aniston is relishing her dark and difficult role in Cake as a painkiller addicted accident victim going through some stuff. “I really was ready to, you know, just disappear and really go into the depths of a character,” she said.