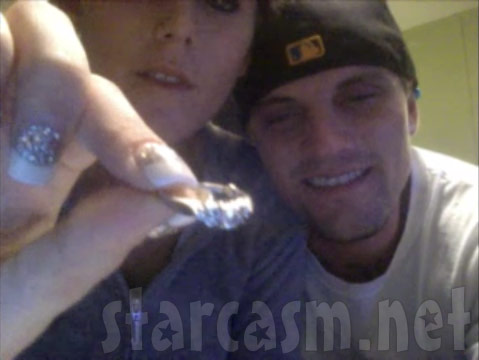 Jenelle Evans and Courtland Rogers have only been dating for a couple of months, and they’ve already had quite the roller coaster with a break up, a reconciliation, a rumored engagement, and even an alleged kidnapping. Fresh off of what appeared to be a rather dramatic split, the two participated in a live Ustream chat during tonight’s episode of Teen Mom 2 and proudly announced that they are engaged!

During the Ustream chat, Jenelle declared proudly, “I’m engaged.” Her beau sat beside her during the entire chat and answered user questions with her. While some asked why they have gotten engaged so soon in their relationship, Jenelle insists there is a good reason for their quick decision.

“I’m not pregnant, but there is a reason behind why he got engaged to me,” Jenelle explained mysteriously. “If you knew the reason, you would understand why we are taking this step. I hope you guys are happy for us.”

tomorrow we r going to start planning!! 🙂 OMG I’ve never been this happy in my life. It’s like a fantasy coming true. I’m going to be married to my best friend/lover/childhood sweetheart. He does anything for me and I do the same for him. I cried for 30 mins becuz i was so happy after i told him yes. then told him “thank u” he said “why” I said “now I will have that family who’s loves me for me that I never everrrr had.” I love u Courtland Rogers forever and always. I’m here for u no matter what the consequences.

In addition to their engagement news, Jenelle also revealed the couple’s plans to eventually settle down and have a baby of their own. “We do want to have a baby,” she said. In fact, they even have baby names picked out for their future children! But don’t worry, she’s not in too much of a rush when it comes to taking that step. Jenelle reassured fans that as of now, she is on birth control.

She then reposted it on her other Facebook wall and changed the last part to read:

I love u Courtland Keith Rogers. U r my soulmate. I can’t wait to spend everyday of every second with u. ♥

And here’s a video clip of the announcement:

For more of Jenelle Evans, be sure to tune in to Teen Mom 2 every Monday night at 10/9c.

Kelly Osbourne and Matthew Mosshart are engaged — see her ring