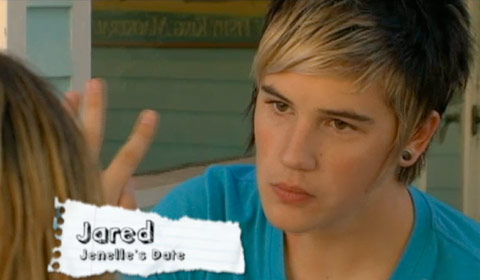 During the premiere episode of the second season of MTV’s 16 and Pregnant party girl Jenelle Evans realized her boyfriend of three years Andrew was great when neither of them had any real responsibilities, but his complete absence after Jace was born combined with a DUI arrest and seven days in prison made it perfectly clear he was going to be a burden at best when it came to being a father. So, Jenelle went out on a date!

Here she is with a soft-spoken alternative dude having a romantic dinner by the water:

A little awkward, but it’s good to see Jenelle moving on!

Don’t miss out on our post detailing Jenelle’s affinity for weed – before, after and during her pregnancy! CLICK HERE to check it out!

And here’s a complete transcription of the date:

Jenelle: One time I was cutting a piece of bread and I cut right through onto my – see that diagonal spot right there on my finger? Yeah, and I had to get stitches.

Jared: (nods) I cut into my shin with a chainsaw one time.

Jenelle: One thing you have to know about me, I love bread and butter.

Jared: Yeah. I’m glad I get to take you out somewhere like this’

Jenelle: Yeah, when I dated Andrew he never toook me out. He, when I first met him, the first Valentine’s Day, he got me this ring. I only keep this ring because I like it! (laughs) Not because of him. So then, um, he got me this with earrings and a necklace to match with it, and that was like $600. But after that, he didn’t get me nothing. He had money from modeling because he used to model in New York, but he spent all 7, no $14,000 on alcohol. Yeah. It’s sad.

Jared: Yeah, that is really sad.

Jenelle: Well when I axed him to buy me like a lip ring or something, he said, “No. I don’t have the money.” You see, Andrew he’s – well see, I have no trouble with like just sitting down and chilling, but he sat in his room in his house every day all day watching TV, staring at the television all day every day, from morning til night. That’s all he did – didn’t work or nothing – that’s it. And evry time I’d go over there that’s all we would do, watch TV. It wasn’t that interesting.

Jenelle: I have to be home by eight because Jace, I have to go watch him.

Jared: He’s a beautiful kid. He looks like you. He has your eyes.

Jenelle: I’m so happy he don’t have brown eyes. I mean, no offense, I don’t want him looking anything like Andrew. (Laughs) Like at all! So…

Jared: (tugs his ear, looking away)

Ummm… A little Andrew-centric, but that’s to be expected the first time out. They did date for three years, after all. (That equates to about 18% of Jenelle’s life.)

Does MTV purposefully encourage drama and conflict on the Teen Mom shows?