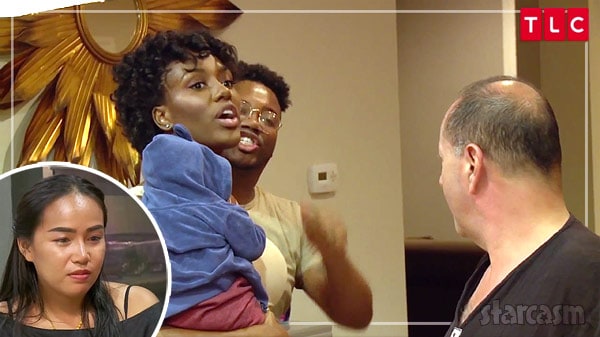 The story line for 90 Day Fiance couple David Toborowsky and Annie Suwan got a SERIOUS drama injection last night with the introduction of Antonio Ticer, who is the brother-in-law of David’s best bud (and patron) Chris Thieneman. But the drama escalated even further off screen as an angry Antonio took to Facebook to throw some SERIOUS shade at Annie after the episode aired!

I will first set things up with the dramatic scene from last night’s episode, in which David and Annie are visiting the home of Chris and his wife Nikki in Chicago. Nikki’s brother Antonio says he just happened to be in town while TLC was filming, so he agreed to be filmed. Here’s a clip in which we see Anotonio and Nikki (and Nikki’s baby) talking with Annie about David — both about his alleged drinking problem, and his reliance on Chris. Things get really heated when David overhears the discussion and makes his grand entrance:

“He disrespected the f**k out of you,” Antonio tells Annie at the beginning of the clip, “and I don’t know nothing about Thai culture and how you all do things when it comes to relationships, but here if a woman f**king disrespected me like that, it’s not gonna be a relationship.” Antonio summarizes in conclusion: “You can’t change anything he’s not ready to do, and right now he’s not ready. How can you be ready to marry him?”

Nikki then says of David: “He’s in denial about the drinking. He doesn’t see it as a problem. It’s a f**king problem.” Annie seems to agree as she concurs that David doesn’t think his drinking is a problem.

Nikki says that Chris doesn’t see David’s drinking as a problem either, and Antonio explains why he thinks that’s the case. “Chris wants to be his friend, and that’s OK.”

Antonio is interrupted by Nikki, who emphatically interjects: “No, Chris is a mama, and he needs to take his *** out of his mouth and let David grow the f**k up.”

This is the point where David enters the scene. “Oh really?” he asks Antonio. “That’s ’cause you want to f**k him.” David then tries to temper what he said by adding “Sorry, I’m trying to have fun.”

Antonio is not seeing the “fun” aspect as he lets his sister Nikki know that he is more than willing to “beat the f**k out of” David. David tries to make peace by stating that Antonio is his “brother” and he loves him, but that does little to quell Antonio’s anger. He continues to threaten violence as Nikki steps in between him and David (with her baby in one arm) and repeatedly calls for Chris.

After the preview clip, tensions escalate and Chris escorts David out of the room. As David leaves, Antonio continues to berate him: “Take your ugly a** back outside, you ugly a** b!tch,” Antonio yells. “You f**king ninja turtle penguin Batman a** b!tch!”

After David leaves, Antonio opens up to Annie and tells her what he really thinks of her engagement to David:

He’s nobody. So, I’m sorry, have a higher standard for yourself, especially if you feel like you deserve better. He already coming at you old, divorced, got kids he don’t f**kin’ give a f**k about or don’t care about. Why the f**k do you wanna be with somebody like that? You young and vibrant, you don’t need that! Period. Point blank. He’s a sorry b!tch! 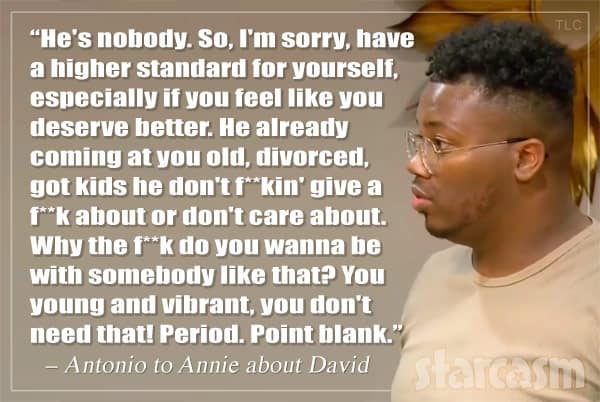 OK, that should pretty much get you all caught up! (My apologies if you saw the episode and didn’t need a recap, but I felt it was important for those that missed out.) Fast forward just a bit and Antonio took to Facebook to offer up his reaction to the episode:

David and Annie storyline was beyond boring, this was the highlight if their scenes…i am very honeat in how i feel and The reason i was in their “business” was only because alot of things were said in disrespect towards me that night, ive been nothing but nice to David and Annie… but him being drunk is an excuse hes an a**hole and ive known this about him for years….

He later revealed that he said a lot of negative things to Annie about her “user” ways, but that producers edited all of those comments out of the episode. So, Antonio made up for it by unleashing on Annie with some very serious allegations: 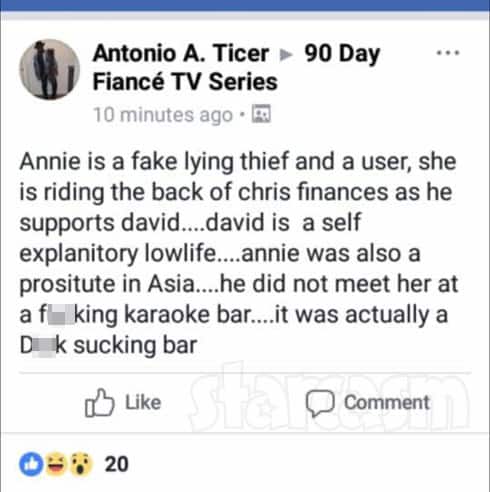 More from Antonio about Annie:

She only wants financial gain for her family she saw how good Chris was supplying for him and assumed that its how it would always be
…annie also stole $ from Nikki..

Literally her and David both full of sh!t

In addition, Antonio alleges that “Annie also had another guy that she was talking to while talking to David at the same time.” Here is that post, which included a screen cap of a photo album posted by Annie in June of 2016: 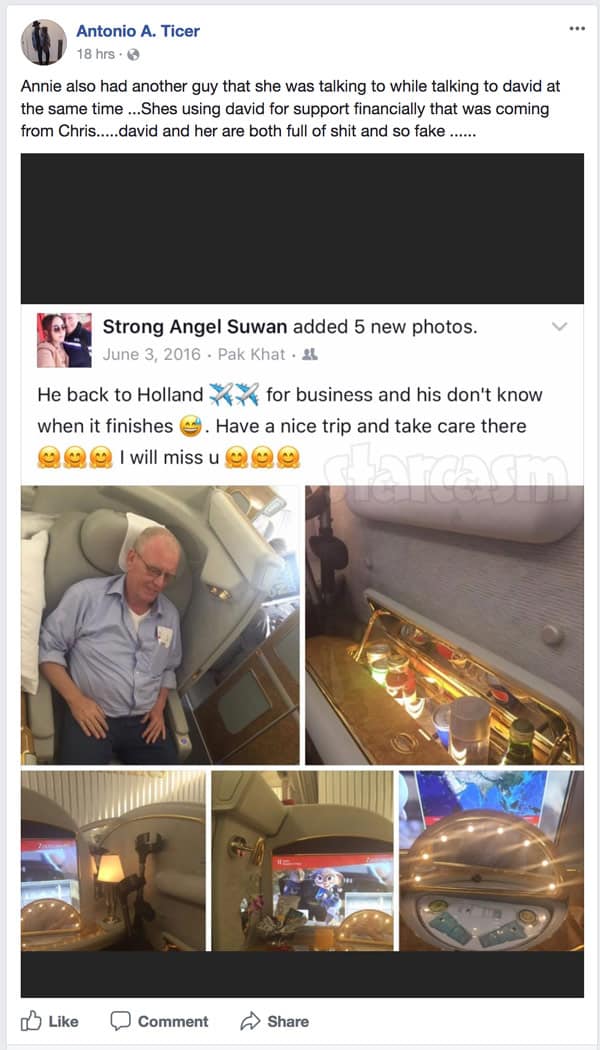 It seems that Antonio’s accusations did not sit well with someone because his brother-in-law Chris Thieneman shared the news on the 90 Day Fiance Facebook group that Antonio has been placed in “Facebook jail.” From Chris:

Antonio A. Ticer is in “FB jail” FACEBOOK HAS PUT ANTONIO ON SUSPENSION. HE SAYS HE CANNOT POST ANYTHING FOR THREE DAYS.

HE SAYS HE WANTS TO RESPOND TO EVERYONE BUT CANNOT FOR THREE DAYS.

KEEP YOU POSTED. HE REALLY WANTS TO EXPLAIN HIS NUDE PHOTOS THAT SOMEONE FOUND ANS POSTED ?
PS. For the record he had underwear on. !

I didn’t even try looking for those “nude” photos, although I am well aware that the lack of effort will all but eliminate this post from Pulitzer contention.

If you were wondering whether or not Antonio’s persuasive debate tactics inspired Annie to change her mind about marrying David, click here to find out if they eventually got married or not!

Meanwhile, you can continue to follow ALL the 90 Day Fiance drama with new episodes airing Sunday nights at 8/7c on TLC.