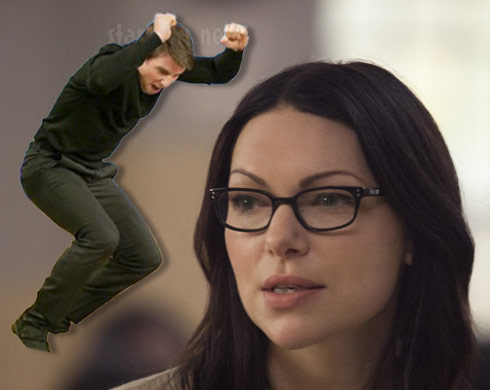 Overseas tabloid Grazia ran a story claiming that Tom Cruise had taken Orange Is the New Black star Laura Prepon on a couple of dates in Los Angeles and that the actor was on “Cloud Nine” and “the happiest he has been since his divorce from Katie Holmes” afterwords.

Here’s how the story went about Tom’s alleged rendezvous with Prepon, a fellow Scientologist, at The Manor Hotel:

“He had her picked up in a vintage car, knowing it was one of her favorite, and had pre-ordered a vintage bottle of 1979 Merlot, which was on the table when she arrived. They spent three hours laughing and joking. It’s clear Tom is smitten and after the date he was on cloud nine. They had their second date at the restaurant too, meeting for Sunday brunch, and then she accompanied him a few days later to a dinner party at John’s [Travolta] home.”

This sounds kind of romantic and like a Scientology press release at the same time some how. The report went on to say, “Tom has known Laura for a few years now and they are all in the same social group that includes John Travolta and his wife Kelly Preston. He’s always been fascinated by her and, since seeing her in Orange Is the New Black, that has turned into an attraction. So he bit the bullet and asked her out.”

Before we all start doing any Oprah couch jumping, The Myth Busters of the tabloid world, Rumor Fix, reached out to Tom’s rep who denied that the two were an item or even had dinner at The Manor. “False — made up,” the rep said.

What does Orange is the New Black mean? The show’s title, explained