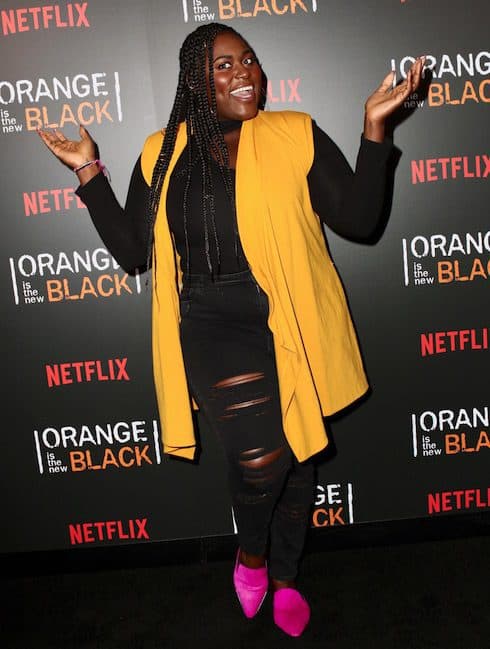 Orange Is the New Black‘s sixth season hasn’t even dropped yet, but it’s looking more and more like OITNB Season 7 — the last one on the show’s current renewal deal — may well turn out to be its last bow, as well. Speculation about the fate of the show reached new heights thanks to some eyebrow-raising comments star Danielle Brooks made on the Season 6 publicity tour.

The show, now popular enough that its title is unofficially better-known than the idiom on which its title is based, has put its characters through an exhausting tumult over the past few seasons. (Here’s your brief warning to look away if you haven’t seen the last season yet.) Thanks to a literally riotous Season 5, Litchfield itself is no more, and Season 6 sees the regulars move down the hill to a maximum security facility.

The show’s increasingly dramatic story arcs sounded like they weighed on Brooks as she spoke with Variety about Orange Is the New Black‘s future. Here’s what she had to say when asked if she felt like OITNB Season 7 would be the last for her personally, “the end of the series,” or both:

I don’t know. I am dreading it….My heart starts feel a little heavy knowing that we might be coming to an end because, especially with my character being a little bit more isolated from all of the other main characters on the show, it’s sort of like damn, can I just rewind the tape real quick? Can I just rewind time and take in those moments a little bit more? To spend more time with my girls, to really soak up those moments that we got to create together.

At this moment, you just don’t know if this is the end or not, so you’ve just got to really cherish every 5:00 a.m. call. You’ve got to really cherish those hours that you’re just sitting in the cell with Nick Sandow or sitting in the cell with Taylor Schilling waiting for them to fix the light. You really have to embrace all of those moments, because it’s going to be the end. I don’t know when, but I feel like we’re closer to the end than the beginning.

Brooks also seemed to suggest that some of the current characters’ stories might need to come to a close before long, saying “There’s no way up from starting a riot in prison, especially when you’re already considered in the bottom of the barrel of society.”

And she touched on Taystee specifically, saying “The fact that no justice was served for Poussey [has left Taystee] really struggling with still feeling quite alone and feeling no sense of family still. Everyone has left [Taystee’s] world, and so we see her trying to fight depression, trying to fight her will to give up.”

Back in 2015, just before Season 4 dropped, the show got a nearly unprecedented three-season renewal, ensuring that it would remain on Netflix through (at least) OITNB Season 7. At the time, the renewal announcement noted that Orange is the New Black was the most popular original show on Netflix, by what seemed like a considerable margin:

Netflix is famously tight-fisted when it comes to offering up viewership data about its original series. But execs with the streaming giant have repeatedly confirmed that “OITNB” is its most-watched original series. That has been backed up by the efforts of outside measurement companies to track viewing in the Netflix eco-system.

And, though Netflix has released literally hundreds of original shows and movies since then, the network has yet to announce that any of them have eclipsed OITNB’s popularity. Given the show’s continued strong ratings — and the company’s continued strong financial success — it’s hard to imagine a scenario where Netflix would allow it to go off the air for purely creative reasons.

In addition to whether or not the show’s stars are ready to move on, one variable to keep in mind as Season 6 debuts and the show’s production moves on to OITNB Season 7 is whether or not Jenji Kohan, the show’s creator, head writer, and executive producer, will stay with the show.

For now, Kohan remains tied to Orange is the New Black, even as she’s begun working on other shows simultaneously. In addition to executive producing GLOW for Netflix, Kohan is also an executive producer for Lifetime’s upcoming series American Princess.

Of course, executive producing a show isn’t the same thing as creating it and maintaining total creative control over it. And Orange Is the New Black‘s success means Kohan — who has a lucrative, open-ended development deal with Lionsgate TV to her name — will have the freedom to do pretty much whatever she wants when she’s decided she wants something else. It’s therefore possible that OITNB Season 8, should there be one, would be helmed by someone else for the first time in the show’s history.

But before then, we’ve still got Season 6 to enjoy. Here’s the trailer for the show’s latest batch of episodes, which premiere on July 27: