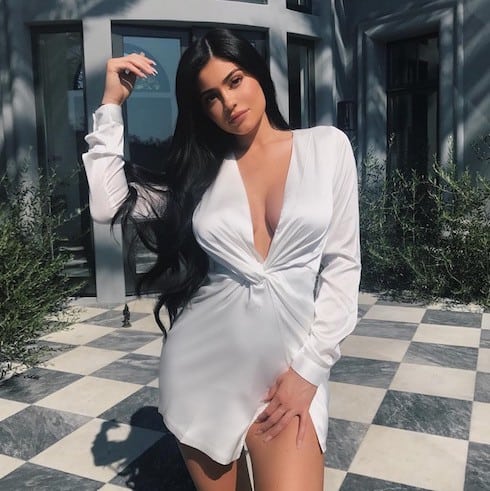 The Kardashians are a gossip industry unto themselves: everything they do is covered in a makeup-thick layer of allegations, claims, and rumors. So it was hardly surprising that news of 20-year-old Kylie Jenner’s alleged pregnancy was greeted with disbelief and skepticism when the story broke late Friday afternoon. There are now hundreds of articles on the topic, but, because the Kardashians themselves have yet to make an official statement, hovering around every one of those articles is the same simple question: Is Kylie Jenner really pregnant?

To be clear, we probably won’t know 100% for sure until the family does say something. And by “say something,” we really mean “Exploit the reveal on an upcoming episode of Keeping Up With The Kardashians.” But there are two details relating to the coverage of the Kylie Jenner pregnancy that are worth pointing out, since both of them lend credence to the scenario. The first is that the story was broken by TMZ, who don’t really dabble in the sorts of anonymous quotes and misleading headlines that result in so much Kardashian gossip. In fact, their story contained no quotes at all–only summaries of what Kylie and boyfriend / baby daddy Travis Scott have reportedly been telling close friends for the past few weeks.

The second detail is that since the story first broke, no less an esteemed organ than People Magazine picked it up and run with it. And People’s audience is big enough that they don’t need to rely on anonymous sources to jump start a story; they’re where major celebrities go to break stories themselves. Which is why their take straight-up assumes that Kylie is, in fact, pregnant, instead focusing all its attention on salacious insider dirt regarding the family’s reaction.

“Kylie is very naïve” and she “of course has no idea about all the hard work and sleepless nights” ahead, says their insider, clearly forgetting that Kylie is on track to become a billionaire by her 21st birthday and can hire enough nannies to keep herself insulated from her kid until high school. The Kardashians “still think Kylie is too young to have a baby,” though they’re also “overjoyed for her” and “This is the happiest she’s ever been.”

People’s story contains one other intriguing point: Travis Scott apparently “began telling friends about the pregnancy in July,” meaning Kylie is at least two months along and possibly about to begin her third trimester. (Devotées will recall that this past May Kylie invited Travis to live with her for the summer.) So it’s further possible that Kylie’s BFF Jordyn Woods wasn’t just being coy when she said earlier this week that Kylie and Travis have begun planning their wedding.

Since it’s looking less and less likely that Kylie Jenner isn’t pregnant, we thought we’d take a trip down memory lane and revisit all the Kylie Jenner pregnancy rumors we’ve reported on over the years. There were actually way fewer than we expected, which is something of a testament to the shroud of gossip and mystery that hangs over all things Kardashian. If, on the other hand, it seems to you like nine is too high a number, remember the wise words of Sonny Corleone: “There’s a lot of money in that white powder.”

For the curious among you, here’s the list, in reverse-chronological order:

October 19, 2016: Kylie Jenner is pregnant with a girl because Tyga’s 4-year-old son got sugar high and said so

October 2, 2016: Kylie Jenner is trying to get ‘accidentally pregnant’ by Tyga (and bought a third mansion, just ’cause)

July 15, 2016: Kylie Jenner reported to be pregnant two hours after she says she’s not

July 11, 2016: Kylie Jenner is not pregnant with Tyga’s baby, despite his alleged best efforts

Kylie Jenner plastic surgery: Teen under fire for using ‘extensive’ cosmetic work to get her look