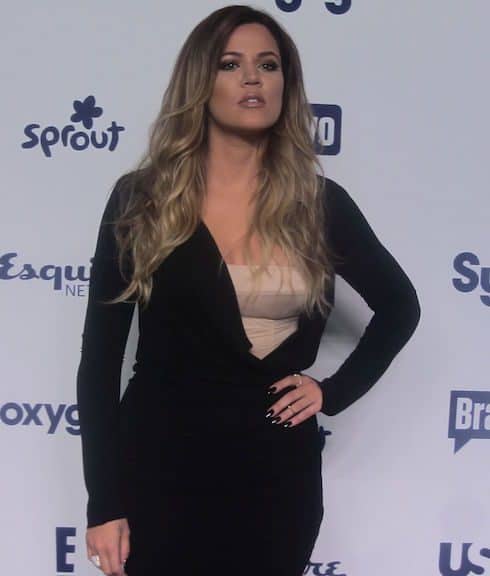 It’s no surprise that momager extraordinaire Kris Jenner is trying to make sure every one of her daughters gets pregnant this year. News of Kim’s fourth pregnancy (and second by surrogate) got 2019 off to a fast start for the family. Now, talk of the Khloe Kardashian second pregnancy has amped up considerably thanks to Khloe herself, after an innocuous response to a fan on Twitter sent the gossip mills a-spinning.

We should point out that there’s no actual news of Khloe’s second pregnancy — which is exactly the point. Insiders allegedly close to Khloe have been talking up the possibility of her and Tristan’s next baby for weeks, usually in conjunction with Kylie and Travis Scott’s second child. It was only a month ago that an anonymous source claimed “nothing will stop” Khloe and Tristan from having baby #2 together.

Enter Khloe’s tweet, which came in response to a fan straight-up asking her if she’s “thinking about having another baby.” Khloe’s response is textbook High-Profile Celebrity; it gives plenty to talk about while actually saying little to nothing (and that’s a compliment to Khloe, by the way, not an insult): 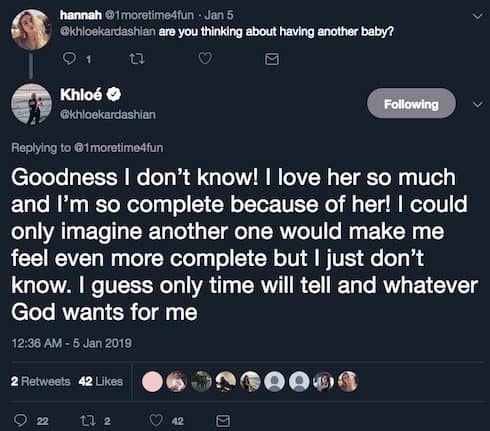 Goodness I don’t know! I love [True] so much and I’m so complete because of her! I could only imagine another one would make me feel even more complete but I just don’t know. I guess only time will tell and whatever God wants for me

This is the reality TV equivalent of an athlete’s postgame locker room Q&A. From “I’m so complete because of [my daughter]” to “Only time will tell” and “Whatever God wants for me,” Khloe deployed a heavy handful of vaguely optimistic clichés, such that if you want to believe it, it’s easy to imagine the Khloe Kardashian second pregnancy is well underway. (Especially since Khloe and Tristan are reportedly stronger than ever.)

Again, that’s hardly a criticism of Khloe, who will never confirm big news indirectly over social media. She’s keeping the Kardashian narrative going while appearing down(er)-to-earth than her sisters — all of whom occasionally answer fans via social media, but none of whom do so as often as Khloe.

Instead, it’s more helpful to read the tea leaves in official Kardashian media. For example, in a Keeping Up With The Kardashians episode from a couple of years ago, Khloe said that she and Tristan “definitely talk about starting a family,” and added Tristan “wants to have like five or six kids” with her.

And this past summer, Khloe said all the new babies in her family were “really making [her] think” about more children of her own.

(Tristan, for his part, has also confirmed he wants more children with Khloe. This past spring, he told Allie Clifton and Richard Jefferson of the “Road Trippin’” podcast that he’s “going to keep going,” kid-wise, and “has a couple more left” in him.)

So far, it sounds like Khloe won’t be one of the more difficult daughters for Kris to convince. Kourtney, who has three children and Scott Disick to tend to, is likely the hardest sell. And homely, acne-ridden Kendall remains the family’s white whale. If you can find a bookmaker with odds on Khloe announcing a second pregnancy this year, put some money down.

Shark Tank: Are the deals for real? Can the Sharks back out?