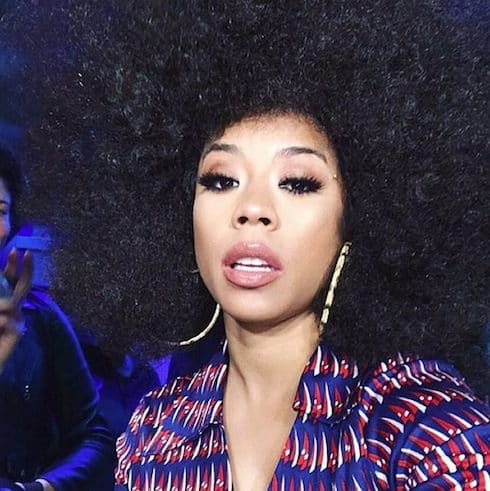 She was one of Love & Hip Hop Hollywood‘s most high-profile cast members last season — but is Keyshia Cole still on LHHH? Official announcements about the new cast are still weeks away — but for now it looks like Cole may have already left her reality TV days behind.

According to The Jasmine Brand — who have been on point with their Love & Hip Hop tea this week — Keyshia “will not return to” Hollywood. Their sources indicate that “there are conflicting reports as to why she’s left,” but the biggest reason appears to be related to product placement.

It’s widely believed that Keyshia only joined the cast of LHHH for Season 4 primarily (if not solely) to promote 11:11 Repeat, her seventh studio album, which dropped shortly after Love & Hip Hop Hollywood‘s fourth season concluded. Over the course of the season, Keyshia performed four tracks from the album, which went on to debut on the Billboard 200 at #37.

And even that lure wasn’t enough to get her to sign. Keyshia also managed to tease out a huge contract for herself and her ex-husband Booby: when initial negotiations with show creator and executive producer Mona Scott-Young went nowhere, Keyshia made those negotiations public by going on The Breakfast Club and claiming she’d turned down a seven-figure contract.

She wound up agreeing to be on the show for a reported $1.5 million dollars. At the time, there was talk that Keyshia’s deal was the reason that Shanda and Willie’s contracts weren’t renewed.

So far, Keyshia hasn’t addressed rumors she’s leaving LHHH. She has been broadening her televisual horizons over the last few weeks, though: Keyshia recently appeared on an episode of Wild N Out, and is set to feature in a future episode of Animal Planet’s Tanked:

Keyshia is the third high-profile Love & Hip Hop Hollywood cast member who’s allegedly left the show since Season 4 ended. A few days ago, it emerged that Masika Kalysha may have been let out of her contract. And Hazel E, supposedly fired after making homophobic comments on social media last year, has already been announced as a new participant on Iyanla Fix My Life.

LHHH Season 5 is filming now, and is expected to air in summer 2018.

(Photo credits: Is Keyshia Cole still on LHHH via Instagram)