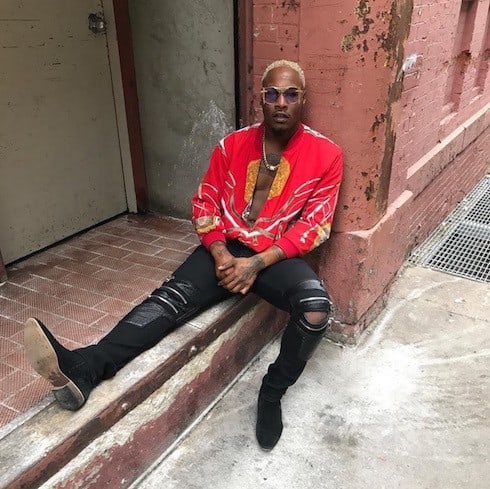 Love & Hip Hop Hollywood filmed its Season 4 reunion this week, and, as you might expect, things got lit like a California wildfire. We already reported on Alexis Skyy’s majoy baby mama bombshell–and the fight with Masika Kalysha she allegedly ducked because of it–but a different brawl from the same taping is also making major headlines.

The LHHH Zell and Misster Ray fight actually comes as no surprise, given that the two of them almost came to blows during last week’s episode. (On a related note, that’s Zell’s reunion outfit in the photo at the top of the article.) The good people over at @lnhhfights were quick to describe the brawl, which apparently began after a little fakery on Zell’s part. “Zell & Ray were going back and forth,” they claimed; “then Zell wanted to hug it out but when Zell went to hug him he faked it and sucker punched, scratched, and kicked Ray.”

@LHHTEA also shared an update of the fight, complete with some of Ray’s wounds from a Snapchat grab:

Since then, though, it seems things have gotten a bit more serious. The reunion was filmed in New York, and the NYPD are reportedly interested in talking with Zell about what went down. Naturally, a TMZ camera found Zell and asked him for a comment, and Zell broke down the whole thing from his point of view:

“Some unfortunate things happened, that I wish didn’t happen,” Zell said, noting that he couldn’t say too much and we’ll all have to watch the reunion to find out more. To that, he added, “I’m man enough to own up to the things I did; I wish everyone else was man enough to own up to the things that they did. I have literally did nothing to this [Misster Ray], he’s just trying to…be super dirty on the show when I just try to keep it on the surface, talk about his appearance.”

Upon being told that Ray allegedly filed some sort of a charge with the police, Zell seemed resigned to seeing the thing through: “If it is [true], I don’t mind turning myself in and handling my business. It be what it is.”

Zell seemed much more upbeat about the whole thing immediately following his role in the taping–here’s his Instagram update from two days ago, still glammed out in his reunion outfit:

The Love & Hip Hop Hollywood Season 4 reunion is expected to air on October 23, though VH1 hasn’t yet made an official announcement.

K. Michelle’s surrogate will reportedly appear with her for LHHH Season 6