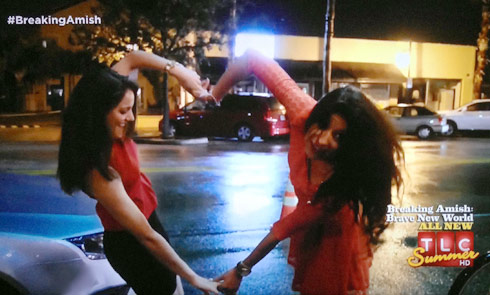 Tonight’s episode of Breaking Amish: Brave New World was big for model Kate Stoltzfus. She helped Abe’s sister Katie Ann get an Amish-to-English makeover, stood up to Rebecca and Abe when they got an attitude about it, and went on a Valentine’s date with a girl on television.

While Kate denied that she and Violetta (sp?) were flirting on their date, she definitely seemed smitten. They were holding hands, dancing, and ended up at the club making out. But still, Kate denies that she’s a lesbian. “People can think what they want, I’m not a lesbian.” Maybe she’s bisexual.

Whether or not it’s truly romantic, Kate definitely at least has a girl crush! “Violetta is the best thing I’ve had happen to me since I was in Sarasota,” Kate says excitedly. “She is the bomb!”

Kate was seen kissing Violetta (and at least one other girl as well) at a club, and the two even did a bit of awkward grinding at one point. Plus, as many fans pointed out when speculating over the mystery shocking video of Kate was first mentioned in the episode last week, Kate never has really shown much interest in any men on the show. So it at least seems that Kate and the producers want us to think she’s gay! Which obviously would not have been an option if she were still in the Amish community.

Kate explains that being gay simply isn’t accepted by the Amish, but neither is being a model and dressing in “English” clothes. When her Breaking Amish costars see the video of her kissing girls, they’re a little shocked, but are ultimately accepting of her — whether it’s experimenting or if she is interested in serious relationships with women.

One things for sure, being a model seems to mean Kate gets to experiment with some very attractive young ladies! 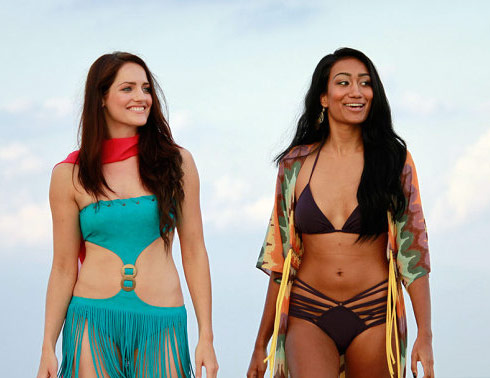