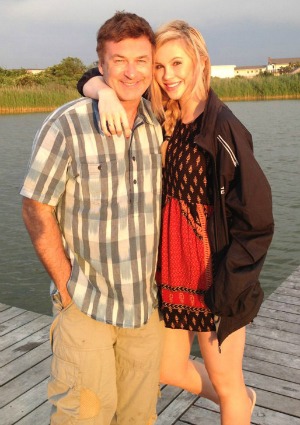 It seems no one in the public can forget the leaked tapes of Alec Baldwin calling his then-11-year-old daughter Ireland a “thoughtless little pig,” and other hateful things. There’s a good reason for that: it was verbal abuse, and a very difficult thing to hear. But Ireland, who is now 17 and seems to have a wonderful relationship with her dad, wants to stop hearing about it. She took to tumblr to make a plea:

Just like almost all of you, my Dad has made some mistakes in the past. He has spoken out of place, he has let his temper get the best of him, and he has reacted towards things in ways he shouldn’t have. I get hateful replies and threats regarding mistakes of my Dad’s past. This isn’t fair. I had nothing to do with anything that happened back then, so I don’t fully understand why I am being targeted. More importantly, my Dad has moved on. He recognized that he needed to change, so he made changes. He is now healthy, happily married with a baby on the way. He moved on, so why can’t you?

The 6’2″ and svelte model also took people on social media to task for calling her fat and/or unattractive:

What I don’t fully understand, is what is the good in commenting on a photo of a 17 year old girl and calling her fat, ugly, etc? Is that helping you in some way? I’m confused. I know girls tend to have nasty things to say about other girls and judging the looks of other girls is only human of us all, but putting that out there is hateful and unhealthy. If you don’t have a complimentary thing to say about someone, keep it to yourself. I am not just talking about comments on photos of myself. I see hateful comments everywhere.

Ireland is making some good points here. What do you think? Should everyone stop talking about Alec’s past mistakes as a father? Do you think people will ever stop making mean comments about others’ appearance online?