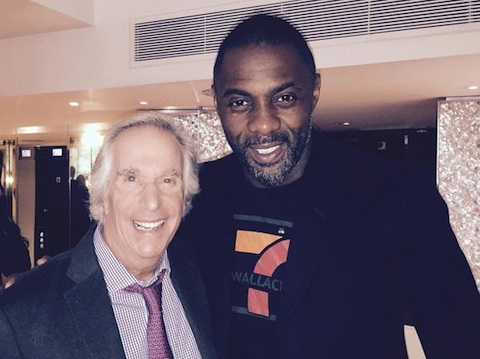 Idris Elba has responded to the furor over a black James Bond like a truly classy fellow. Earlier this week, Rush Limbaugh continued his break with logic and took to the airwaves to decry the idea of a black Bond. Limbaugh’s tantrum came in the wake of the revelation, brought to us by the Sony Hack Attack (#SonyHackAttack) that Sony exec Amy Pascal thinks Elba should take over playing Bond once Daniel Craig finishes his time in the character’s magnificently-tailored suit.

Silent throughout all of the furor–probably because it was Christmas, and he was otherwise occupied–was Idris Elba himself. Today, though, I-Elb took to Twitter and deflated the whole goofball scenario with one fell Tweet:

Well-played, sir. The high ground is yours. Though, given that R-Limb was on the other side of this particular “argument,” the high ground was pretty much always going to be yours.

By the by: Though both parties have expressed great interest, so far, reports of an Elba / Henry Winkler crime-fighting-and-cool-cat-being project entitled “Bondie and the Fonz” remain unfounded. We’ll keep you posted on any further developments.

Rush Limbaugh thinks Beyonce is telling women to “bow down” to their men, is he right?