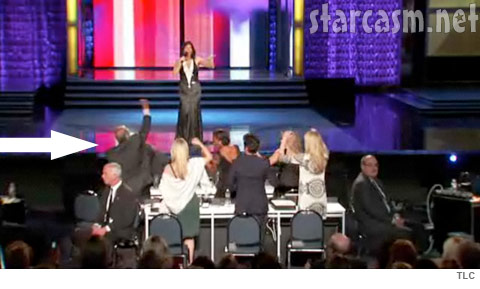 The Jersey Shoritization of the planet took a huge step forward by converting one of the most influential media personalities on the political landscape. Conservative talk show host Rush Limbaugh revealed his new religion during a preliminary event at the Miss America Pageant called “Judge the Judges.”

The host introduced the talent portion of the “Judge the Judges” competition, explaining that they would be dancing to Lady Gaga’s “Poker Face.” Rush seemed reluctant at first, but then he must have heard the call because he started convulsing and speaking in fist pumps! I’ll let the video speak for itself:

Tune in tonight on TLC to watch the actual Miss America Pageant where Rush will try to play Yin to Perez Hilton’s Yang from last year when he sprung the gay marriage question on Miss California Carrie PreJean. He really has his work cut out for him because it’s a lot harder to come up with a controversial question where not answering conservatively would outrage the media, so here is my list of suggestions:

Who do you think would have made a better Vice President, Sarah Palin or John Edwards?

At what point do you think it’s OK to kill an unborn child?

What do you think about socialized healthcare in America?