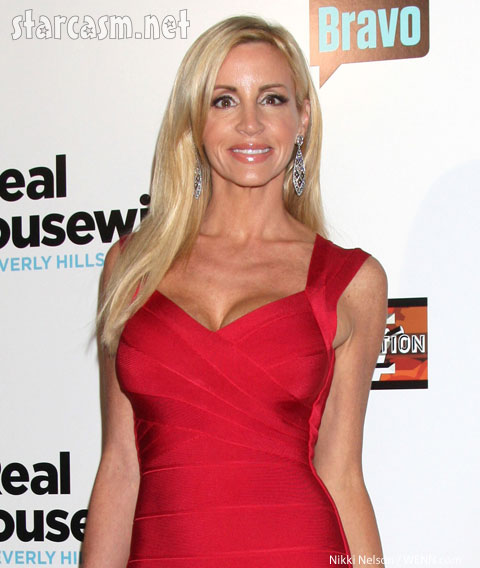 The Real Housewives of all the cities have offered up their lives to the public, and while sometimes the situations are “set-up” the drama is often all too real with real life consequences. The Huffington Post broke up some of these life-changing events by the numbers, focusing on bankruptcies, divorces, and businesses in an infographic.

We’re taking their chart a step further, providing a little extra information about each one. This post, we’re listing the divorces. We’ll have separate posts for businesses and bankruptcies.

It’s hard enough to stay together when the details of your life aren’t of national concern, so it’s no surprise that many marriages have been strained after appearing on the show. Of course, most of the relationships showed signs of trouble anyway were probably headed for divorce with or without cameras. In some cases the reality fame might have speeded things along, but that’s just one of those things you’ll never know.

The Huffington Post says 25% of the Real Housewives have gotten divorced. They included Brandi Glanville on the list, she we’ve included her below, but we don’t know if she necessarily counts as she got a divorce before she joined the cast.

Taylor Armstrong, RHoBH– Taylor filed for divorce, citing abuse claims, but was still legally married to Russell when he took his own life August, 2011. Taylor and Russell had one child together: Kennedy.

Tamra Barney, RHOC – Divorced Simon Barney in 2010 after 11 years, and is now engaged to Eddie Judge. Simon and Tamra have three children together: Sidney, Spencer, and Sophia. Tamra also has a 25-year-old son Ryan from another marriage.

Lynne Curtin, RHOC – Lynne filed for divorce December 2012, after being married for 22 years to Frank Curtin. She wanted to file in January of 2012 after they separated, but waited almost 12 months. They were under a lot of financial strain, some of which was documented while they wer still cast-members of the show. Frank made a statement that he still loved his wife, but that “She’s just not herself right now” due to their financial stress. The couple have two children: Raquel and Alexa.

LuAnn de Lesseps, RHONY – LuAnn was married to Count Alexandre de Lesseps for 16 years before divorcing in 2009 after he ran away with an Ethiopian Princess. LuAnn is now dating a French wine distributor named Jacques Azoulay. They are reportedly still together dispute a cheating scandal storyline last season. They have two children: Victoria and Noel.

Bethenny Frankel, RHONY and spin-off show – Bethenny Frankel chronicled dating, getting pregnant by, and marrying Jason Hoppy on Real Housewives of New York, and her resulting spin-off shows Bethenny’s Getting Married? and Bethenny Ever After. The last season of Bethenny Ever After involved marital problems with Bethenny and Jason. They had one on-camera fight, and Bethenny told her therapist about many private fights at home. They were married March 28, 2010, and Bethenny filed for divorce in January 2013. Jason filed papers with the same requests as Bethenny including full custody of their daughter Bryn, and full use of the home they once shared.

Brandi Glanville, RHOBH Brandi’s divorce from Eddie Cibrian, her husband of nine years, happened before she was cast on Real Housewives of Beverly Hills, but it was a very public split because Eddie cheated with LeAnn Rimes, who he married after divorcing Brandi. They were married in 2001, and divorce was finalized September 2010. They have joint custody of their two sons Mason Edward and Jake Austin. Click here to see a timeline of Brandi and Eddie’s marriage, and Brandi’s ongoing feud with LeAnn.

Camille Grammer, RHOBH Shortly after filming began on the first season of Real Housewives of Beverly Hills, Camille and husband of 13 years Kelsey Grammer divorced. It was revealed that he was in love with Kayte Walsh, a flight attendant. Kayte suffered a miscarriage, but did have a baby with Kelsey after they married. Kelsey has since said that he “gave” Camille Real Housewives because he thought he owed her fame.

Vicki Gunvalson, RHOC – Vicki was married to Donn Gunvalson for about 16 years before she filed for divorce in October 2010. Donn has been a father figure to Vici’s two children from a previous marriage, Michael and daughter Briana Wolfsmith. Donn is now fighting prostate cancer, and Vicki has moved on to dating Brooks Ayers. They briefly split in late 2012, but were reunited for New Year’s Eve.

Jeana Keough, RHOC – Former Real Housewives of OC castmember Jeana Keough went through a separation with her husband Matt Keough, a former major league baseball player, on camera. Even though they split, Matt still lived in the house, and as of 2013 it looks like the divorce has still not been finalized. Matt has struggled with numerous legal issues due to a problem with binge drinking. They have three children together: Shane, Kara and Colton.

NeNe Leakes, RHOA NeNe Leakes’ divorce from husband Gregg has long been speculated as a potential fake storyline to help ramp up her drama on the show. Regardless of how genuine the split was (Gregg got caught throwing Nene some shade on the radio in the middle of their break-up,) they are now officially back together and getting married again. They have one biological son together, Brentt, and Greg has been a father figure for NeNe’s son Bryson from another relationship. Bryson has given NeNe a granddaughter Bri’asia, who NeNe refers to as her “glambaby” on the show.

Adrienne Maloof, RHOBH Adrienne Maloof and Paul Nassif decided to get divorced July 2012, and allegations flew for a while until they came to an amicable decision. They have three sons together: Gavin, Colin and Christian. Adrienne is now dating Rod Stewart’s son Sean.

Catherine Ommaney, RHODC In June, 2010 Cat Ommaney split with husband Charles Ommaney,a photojournalist working at the White House at the time. The paired married in 2008, and have no children together, though Cat had two daughters from a previous marriage. In December, 2012 Cat gave birth to her third daughter, Zara Isabella. This is definitely one case where the show had a major impact on the divorce. After the show aired, Charles Ommaney’ new-found fame cost him his job, and possibly his ability to get other work because it was hard for him to get good shots when people recognized him. He moved to Miami and told The NY Times that he regretted doing the show.

Michaele Salahi, RHODC Michaele and Tareq Salahi, known as the “White House Crashers” because they attended a State Dinner without an invitation, were married in 2003, and divorced in 2011 after Michaele ran off with Journey guitarist Neal Schon. They don’t have any children together. This pair have been involved in a number of shenanigans before and after they were famous, you can (partially) catch up on those here.

DeShawn Snow, RHOA — DeShawn was on the first season of Real Housewives of Atlanta, and she was not the most memorable cast member of the franchise (her most memorable moment was hiring a crew of house staff to rival Downton Abbey when she didn’t even know where her husband was gonna get his next gig.) DeShawn and husband Eric Snow split in May of 2010 after it was discovered that he had a pregnant mistress. DeShawn and Eric have three kids, and DeShawn has since dropped 30 pounds and written a bunch of books.

Lisa Wu, RHOA Lisa Wu appeared on early seasons of Real Housewives of Atlanta with her husband Ed (real name Edgerton) Hartwell, who she married in 2005. By 2010, there were already whispers of a split, and Ed finally filed for divorce August, 2011. Lisa Wu, no longer a RH cast-member, is now trying to start up an acting career and launch a lip gloss line. She and Ed have one child Ed. Jr.