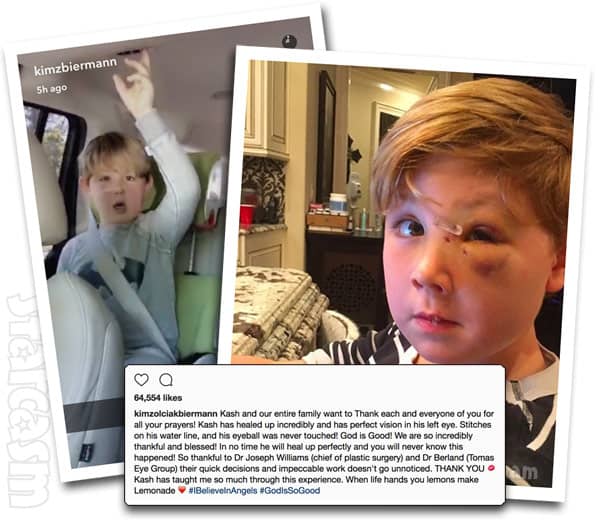 It’s been more than two weeks since Kash Biermann, the 4-year-old son of The Real Housewives of Atlanta star Kim Zolciak-Biermann and husband Kroy Biermann, was hospitalized with “traumatic injuries” from a dog attack. Earlier today, mom Kim updated fans on Kash’s progress with a photo and video of the startling injuries to his face, which she says have “healed up incredibly.”

“Kash and our entire family want to Thank each and everyone of you for all your prayers!” Kim captioned the Instagram picture below. It is clear in the photo that the entire left side of Kash’s face was damaged during the attack, but Kim assures us that his left eye was unharmed and it still works perfectly. “Kash has healed up incredibly and has perfect vision in his left eye. Stitches on his water line, and his eyeball was never touched!” 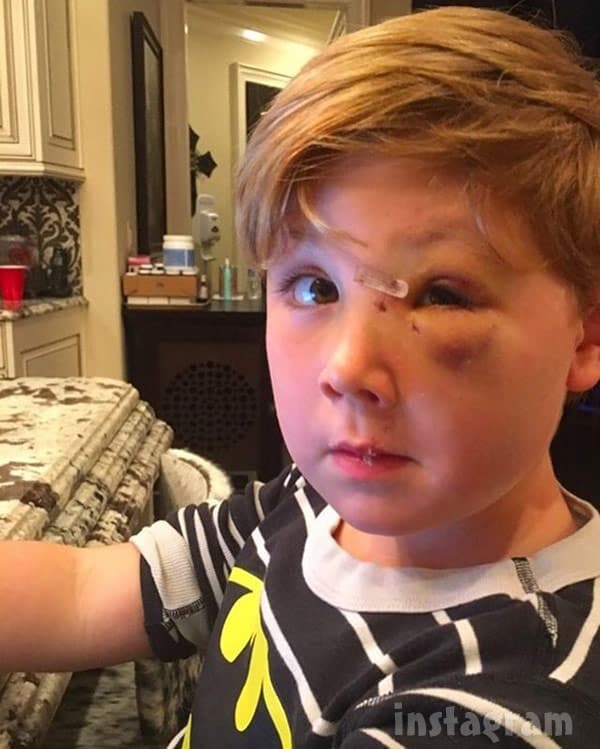 Kim went on to express her gratitude for God that Kash was not more seriously harmed in the attack. “God is Good! We are so incredibly thankful and blessed! In no time he will heal up perfectly and you will never know this happened!”

The entire experience has humbled Kim, and she reflected on the wisdom she has gained. “Kash has taught me so much through this experience. When life hands you lemons make Lemonade,” she wrote, adding a heart emoji as well as the #IBelieveInAngels and #GodIsSoGood hash tags.

In addition to the Instagram photo, Kim also posted a brief video clip on Snapchat in which you can see Kash in the backseat of their SUV. Here in a screen shot, which Kim captioned with “Kash looks so good!!” 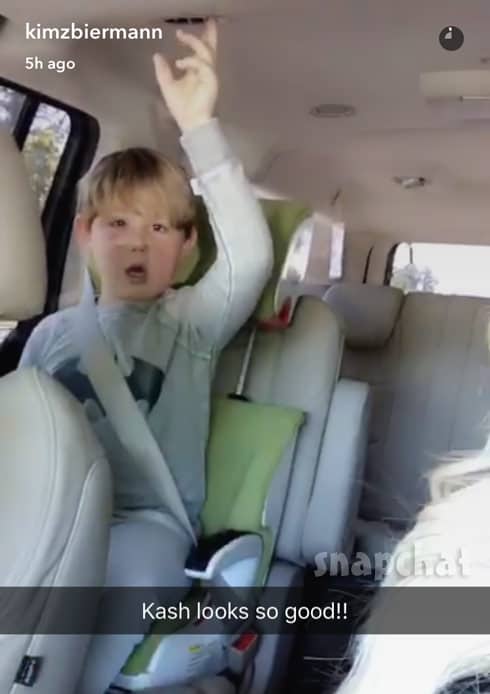 It’s so great to hear the good news from Kim! We certainly wish Kash a continued speedy recovery!

Details about the incident, including whose dog it was that attacked Kash, are still unclear. Kim Zolciak was recently on Watch What Happens: Live! and she stated that she could not comment on the owner of the dog or share details about the attack at this time.

Kim and her family do have two larger sized dogs, a boxer/husky mix named Sinn (after Frank Sinatra) and a Labrador (mix?) named Norma Jean (after Marilyn Monroe). There has been no indication that is was either Sinn or Norma Jean that attacked Kash. In addition to Sinn and Norma Jean, the Biermanns also have at least two other dogs: Chow-ish siblings Jett and Turbo. Here are some photos of Biermann family with their dogs over the last few years:

Sinn will Always be my baby ❤️ this is when we first got him ?

Kane LOVES LOVES Sinn!!! He gives him his shoes, food, anything he can find! Sinn chews up EVERYTHING hence why there is no pad in the crate! ? I'm loving Kane's new pants the material is to die for! Thank you @theminiclassy ???

Best thing we ever did was rescue Sinn!! @cheftraceybloom rescued him and his 8 siblings and mom when they were 3 weeks old THANK God ❤️❤️❤️❤️❤️❤️❤️

Welcome our new baby Norma Jean ?? we just had to rescue her ? I'm totally in love. Sinatra will have a new BFF #AdoptDontShop #HumaneSociety #Lab

My two rescues ? Sinn "Sinatra" and Norma Jean ❤️ I had no idea about "rescuing" dogs until @cheftraceybloom came along! If I could have 10 more I would but Sinn would be too upset ?❤️

We have 2 new babies!!! We are soooo excited Jett (on the left) and Turbo (on the right) they are brothers and 8 weeks old! Jett weighs only 11ounces and Turbo weighs 24ounces ??? #iknowchanelsentmethesetwo

And here’s a video of Sinn playing with one of the boys with a message from Kim expressing what a great decision it was to rescue him: