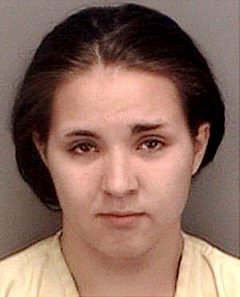 The “Hiccup Girl” Jennifer Mee, who appeared on television in 2007 several times to talk about her marathon hiccup sessions, has been charged with murder in Florida after what cops call a “botched robbery.”

The now 19-year-old Mee, who ran the talk show circuit claiming to have hiccuped for five weeks straight, kidnapped Shannon A. Griffin, with two male accomplices: Laron Raiford (20) and Lamont Newton (22) in St. Petersburg Florida, her hometown. The police say the crew took Griffin to a house to rob him, but when a struggle broke out Griffin received “several gunshot wounds to his upper body.”

Shortly after her media tour in 2007, Mee ran away from home.

Below is a clip of Mee on GMA. She has also appeared on The Today Show, Ellen, The Tonight Show, and several other television shows:

Real beer belly: Man gets drunk from alcohol made inside his body