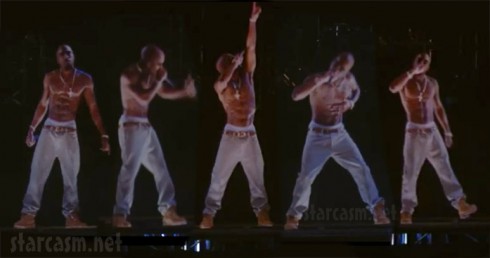 The 2012 Coachella Valley Music and Arts Festival features an impressive lineup that includes Radiohead, The Black Keys, Dr. Dre, Bon Iver, and Florence and the Machine. But, the artist who stole the show over the weekend was a surprise performer – a surprise not only because he wasn’t on the billing, but because he’s been dead for over 15 years! Rapper Tupac Shakur made the ultimate gangsta move by coming back from the dead to perform a couple songs for a stunned audience, including a duet with Snoop Dogg on “2 of Amerikaz Most Wanted!”

No, Tupac isn’t Tuback from the dead – the performance was created using hologram technology.

Although I have to confess the show was pretty damn cool, I’m worried about what this technology may mean for the future of “live” performances. We already have issues with singers lip syncing on stage, and now we can have them body syncing? Hell, Britney Spears could go “on tour” without ever having to leave her sofa!

And that doesn’t even touch on the frightening thought of memorial concert tours from dead musicians. Bands will be able to perform again with dead members (The Doors, Lynyrd Skynyrd, Queen) and there could also be tours from the likes of Otis Redding, Jimi Hendrix, and Elvis Presley. It’s scary to think about, but I have no doubt that these kinds of shows would make a lot of money, so we should consider them to be inevitabilities.

Would you go see a hologram concert?