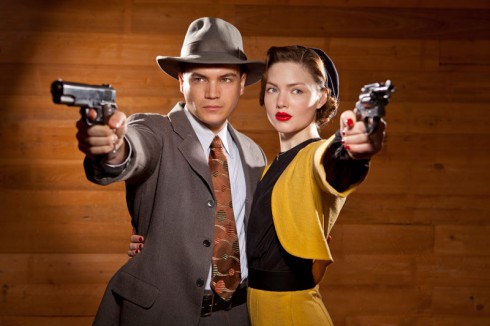 Tonight is the premiere event of the two-part miniseries Bonnie & Clyde starring Holliday Grainger and Emile Hirsch simulcast on three different networks (History, A&E, and Lifetime). In honor of the story of America’s most notorious outlaw couple being retold on the small screen, I thought I might gather together some of the best musical tributes to Bonnie & Clyde from over the nearly eight decades since they went on their headline-grabbing crime spree that lasted for years before both were shot and killed in an ambush in Bienville Parish, Louisiana on May 23, 1934.

To kick things off I thought it might be appropriate to share the preview trailer for the Bonnie & Clyde miniseries featuring Nico Vega’s take on “Bang Bang (My Baby Shot Me Down),” previously a hit for both Cher and Nancy Sinatra. The song isn’t officially part of the list because it isn’t specifically about Bonnie & Clyde, but I think it’s perfect for setting the mood and honoring the miniseries premiere:

And here’s the list of the best Bonnie and Clyde songs, in no particular order:

The Legend of Bonnnie and Clyde – Merle Haggard 1968

Recorded in the height of Bonnie and Clyde fever just after the release of the famous movie starring Warren Beatty and Faye Dunaway, “The Legend of Bonnnie and Clyde” is the title track off Merle’s 1968 album of the same name and was co-written with Bonnie Owens. The song is a pretty straight-forward account of the couple’s story performed by one of the greatest voices in popular music history. The song was a huge hit, becoming Merle’s fourth number one hit. (The song was later recorded by female country legend Tammy Wynette for her classic D-I-V-O-R-C-E album released the same year.)

British R&B singer Georgie Fame recorded “The Ballad of Bonnie & Clyde,” penned by Mitch Murray and Peter Callander, after seeing the 1967 film Bonnie & Clyde starring Warren Beatty as Clyde Barrow and Faye Dunaway as Bonnie Parker. Featuring gunshots, police sirens and car cause sound effects, the song was Fame’s biggest hit, hitting number one in the UK Singles Chart on January 24, 1968 and reaching number one in the US later that year. The song starts, “Bonnie and Clyde were pretty looking people, but I can tell you people they were the devil’s children…”

Tupac Shakur (under the alias Makaveli) recorded this song for what would turn out to be his final album, The Don Killuminati: The 7 Day Theory, which was released in November of 1996. The song uses Bonnie and Clyde to describe Tupac’s relationship to his gun. WARNING – Explicit language!

One of Eminem’s most infamous songs, “’97 Bonnie and Clyde (Just the Two of Us)” features the singer placing the body of his dead wife in the trunk and then taking her to the beach with his daughter, all with a very dark sense of humor. It was included both on The Slim Shady EP and The Slim Shady LP.

The Bonnie and Clyde theme gets yet another hip hop treatment courtesy of Jay-Z and Beyonce Knowles. The song samples Tupac’s “’06 Bonnie and Clyde” and was the lead single off Jay-Z’s seventh studio album, The Blueprint 2: The Gift & The Curse, in October of 2002. Reaching number four on the Billboard Hot 100, the song was the first studio collaboration between the future husband and wife. The video features Jay-Z and Beyonce as modern-day Bonnie and Clyde and was nominated for Best Hip-Hop Video at the 2003 MTV Video Music Awards.

Kellie Pickler has the most recent ode to B&C on our list with this single off her recently released The Woman I Am album. The song is a love song that begins, “Some things are just meant to be, Like a strike of match to gasoline, You and me light up the night, Like a cigarette to dynamite…”

Yo-Yo (along with Ice Cube) was the first major rap act to incorporate the gangster ways of Bonnie and Clyde in a rap song. Released on the album You Better Ask Somebody in 1993, this was the third duet between her and Ice Cube. The pair would revisit the crime duo in 1996 with their follow-up “Bonnie and Clyde II” off the album Total Control.

This song, written in French and in the wake of the Beatty/Dunaway film, was based on a poem by Bonnie Parker titled “The Trail’s End,” written just a few weeks before she and Clyde were shot down and killed. The song was featured on Serge’s critically acclaimed album Initials B.B. as well as his duet album with Bardot titled Bonnie and Clyde. The song would later be covered by Belinda Carlyle on her French album Voila.

Bluegrass Hall of Famers Flatt and Scruggs were famously featured on the popular soundtrack to the Bonnie and Clyde film in 1967 and they capitalized on the exposure with the album The Story of Bonnie and Clyde in 1968 featuring 11 tracks about the duo. (The album has not been released on CD, but you can find it in its entirety on the Bear Family box set Flatt & Scruggs 1964-1969, Plus.) “Bang, You’re Alive” is the final track on the album and was one of six songs on the record penned by Country Music Hall of Famer Tom T. Hall. I could have chosen just about any track on the record, but for me this one is a standout with its Tom T. Hallian sense of humor and Lester Flatt’s laid back vocals.

As a special honorable mention for the list, here is perhaps the most famous Bonnie and Clyde song ever, even though it is an instrumental that wasn’t originally composed with Bonnie and Clyde in mind. Originally recorded in 1949, “Foggy Mountain Breakdown” is one of the most popular bluegrass songs of all time and was used often in the 1967 film starring Beatty and Dunaway, most famously in the chase scenes. It’s difficult to imagine an old-timey car chase without it!

Soundgarden reunite after 13 years for surprise show in Seattle.