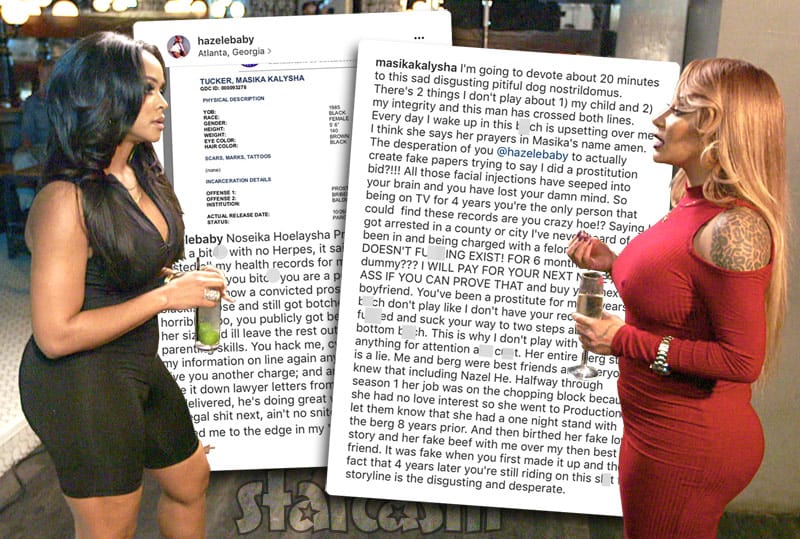 Love & Hip Hop: Hollywood kicked off its fourth season last week, and show rivals Hazel-E and Masika Kalysha took the on-screen drama to the social media streets by throwing gas on their burning feud. Most recently, Hazel-E posted receipts allegedly showing that Masika was arrested for prostitution and bribery in 2004, but Masika denies the arrest and somehow gets even more unchained with her profanity-laden Hazel-E bashing!

First, let’s rewind a bit and set the table with just a few snippets from the epic back-and-forth between these ladies over the past week:

HAZEL-E: Don’t ever fuqqin say my nicca beat me or my mother you can pull his police reports, I’m not you and he’s not young berg who dragged yo ass through a hotel room b!tch! But you are a deadbeat, prostitute, p0rn star of a mother. I got your police records from being arrested in 2003 for prostitution, you might have closed your dcfs case from the public, but that don’t keep you safe. Lie again on me b!tch and you won’t be able to 40 yard dash from me. It’s all fair game cuz we at war right! Go check ya baby into rehab with teairra b!tch! And keep my name out your fuccin mouth!

I already warned yo old raggedy fugly bum a** about speaking on my child. Your warnings are over hoe go get ya a** beat & suck d**k after

What type of no home training a** 57 yr old no talent having can’t rap her way out ofa Christmas present B!tch speaks on a 15 month old baby

Masika then tweeted an alleged email correspondence between Hazel-E and Cash James in which the Hazel-E email account wrote:

Jus left dr’s…I have a bacterial infection I knew it!…I also got std and aids test jus to be sure…I have 2 take meds…u should go get a test 2…so when we see each other we don’t have any problems…imma go get dinner then home I need 2 write 2…clear my head…but yea I miss u…ill try 2 do the kiss thing jus don’t kwo how 2 get it 2 u…luv u boo gotta take my meds and no sex 4 2 weeks so glad ur gone no temptation!

Bish keeps her kitty clean period… but you gone acknowledge it was a hack and then run like it's real foh https://t.co/IuVlPlzCHF

#WhenUJustCantGetWifed( names have been blocked out to protect the innocent ni**as that don't want no on to know they know this hoe) pic.twitter.com/x2utjk2Ren

There were a series of Hazel-E Instagram posts that were unfortunately deleted and potentially lost to pop culture history forever. Here’s how they started though, thanks to the Twitter links that still remain:

@masikakalysha now you posted a email hack from 2015 from fake emails from 2009. I’ll post the…

Now this is facts! More receipts coming all day! Post your reports! Post your health records and…

Now let’s talk about critter coochie Bish get your vagina together, stop fuqqin everyone who’s…

Hazel-E would eventually post alleged receipts for Masika’s arrest for prostitution and bribery in 2004:

HAZEL- E: Noseika Hoelaysha Prostatucker. Never been a b!tch with no Herpes, it said bv b!tch. and I posted all my health records for my very clean ass pu**y… But you b!tch you are a petty theft admittedly, now a convicted prostitute, you had a blackish nose and still got botched titties and horrible Lipo, you publicly got beat by a ni**a half her size and ill leave the rest out about your horrible parenting skills. You hack me, cyber bully me post my information on line again any health records, Ima give you another charge; and any other site better take it down lawyer letters from @waltermosley Will be delivered, he’s doing great with Chyna, I’ll start my legal sh!t next, ain’t no snitch but y’all have pushed me to the edge in my “Lil Uzi” voice

MASIKA: ????????????? B!TCH YOU REALLY GOT SOMEONE TO MAKE THIS DOCUMENT ??????????????????? B!TCH I WAS STILL IN FUC*** HIGH SCHOOL I WAS A VIRGIN STILL YOU UGLY MONKEY. Where the F**k is Baldwin?!!!! Never been there or heard of that s**t Sooooo I been on tv for 4 years and all of a sudden I have a secrete record that nobody but you could find huh? Fu**ing clown. You’re a sad sick desperate fu** bum a** c**t I was gonna let yo wh*re a** slide BUT you done took it too far making up FAKE PROSTITUTION PAPERS! Hoe you been geeting fu**ed and dumped beggin for money and never gettin claimed. Remember the guys you told me u FU**ED BUT THEY JUST WONT WIFE YOU? Anthony Morrow, nick young, Paul George, young Myles from moesha, Derrick Ward, Jr smith, shall I continue???? You’re an obsessed stalker b!tch. You wanna be me so bad. You wake up everyday with me on your mind. You probably say your prayers in Masika’s name Amen. You clearly have no life, no love, we all know you have no talent but now I have no more patience B!tch. You played with the RIGHT B!tch this time wh*re

But the prison on the fake a** records she posted is a male prison in New York ? sick disgusting pathetic no life b!tch https://t.co/WBCZwUSCA1

MASIKA: I’m going to devote about 20 minutes to this sad disgusting pitiful dog nostrildomus. There’s 2 things I don’t play about 1) my child and 2) my integrity and this man has crossed both lines. Every day I wake up in this b!tch is upsetting over me I think she says her prayers in Masika’s name amen. The desperation of you @hazelebaby to actually create fake papers trying to say I did a prostitution bid?!!! All those facial injections have seeped into your brain and you have lost your damn mind. So being on TV for 4 years you’re the only person that could find these records are you crazy hoe!? Saying I got arrested in a county or city I’ve never heard of or been in and being charged with a felony that DOESN’T FU**ING EXIST! FOR 6 months you dummy??? I WILL PAY FOR YOUR NEXT NOSE AND ASS IF YOU CAN PROVE THAT and buy your next boyfriend. You’ve been a prostitute for many years b!tch don’t play like I don’t have your recites. You fu**ed and suck your way to two steps above the bottom b!tch. This is why I don’t play with this do anything for attention a** c**t. Her entire berg story is a lie. Me and berg were best friends and everyone knew that including Nazel He. Halfway through season 1 her job was on the chopping block because she had no love interest so she went to Production to let them know that she had a one night stand with the berg 8 years prior. And then birthed her fake love story and her fake beef with me over my then best friend. It was fake when you first made it up and the fact that 4 years later you’re still riding on this sh!t for storyline is the disgusting and desperate.

I did a little fact checking, and it turns out that Masika is sort of right. There is a Baldwin State Prison located in Georgia, which used to include the Georgia Women’s Correctional Institution, but it hasn’t housed women prisoners since 1993 after they were all relocated “to get the female inmates out of a culture at Georgia Women’s Correctional Institution that had allowed officers and other workers at the prison to engage in sexual relationships with inmates.”

Also, I could find no matching records for Masika on the Georgia Department of Corrections website.

Meanwhile, Draya Michele attempted to intervene and put out the off-screen fire:

DRAYA: You 2 BOTH have good heads on your shoulders and I legit hate that this show is eating y’all 2 up like this. Just get the check from this and keep it “fictional”

MASIKA: @drayamichele sis I swear I rise above this clown sh!t. We’re on the same show so I’m not trying to act like I’m above everybody on this sh!t but I don’t give a flying f**k! My team has actually created a plan and these b!tches have no plan, no kids and nothing to lose. This show is their whole life. So when they want attention they attack me. But to make up fake prostitution papers and talk about my daughter????? All for what? To make a blog? This hoe would literally die if she could get VH1 to film her funeral and promise to talk sh!t about me in her eulogy. IM DONE

Something tells me Masika is far from DONE. Be sure to tune in to the new episode of Love and Hip Hop: Hollywood Monday night at 8/7c to find out what sparks the newest round of feuding next week!