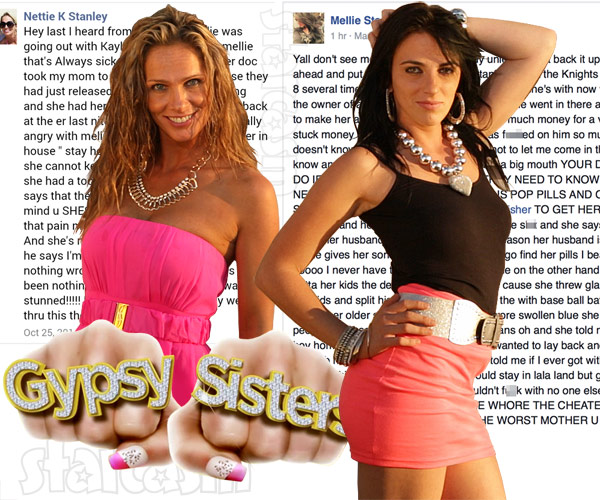 Being a celebrity blogger who covers a number of reality shows, I often run across instances where the off-screen drama is even more dramatic and over-the-top than what viewers see on screen. But, I have never EVER seen anything even remotely close to the 24/7 dramafest surrounding the cast members of TLC’s Gypsy Sisters! There are multiple Facebook groups and pages and even a new website dedicated to covering all the developments surrounding the Stanley family, and one of those Facebook pages is at the center of the latest feud between sister Mellie Stanley and Nettie Stanley, resulting in Mellie going on multiple epic public tirades calling Nettie out for, well, pretty much everything!

The latest Mellietdown comes after it was revealed through a series of screen caps (you know there’s a lot of off-screen drama when every third Facebook post has at least one screen capped conversation) that Nettie has allegedly been leaking information to a Gypsy Sisters gossip page about Mellie and other family members. (I should note that these screen caps were posted on a different Facebook Page dedicated to outing the admins on the other Gypsy Sisters Facebook gossip page.)

UPDATE – This feud got way out of hand very quickly and we have decided it would be best to remove Mellie’s comments and Nettie’s lengthy responses due to some of the very personal allegations made by each. Suffice it to say Nettie denies being in contact with the Gypsy Sisters Facebook page in question and Mellie disagrees — strongly. Things seemed to have quieted down a bit, although both are still occasionally feuding on their public Facebook pages. It is unclear what the impact of this apparently VERY serious falling out will have on the planned next season of Gypsy Sisters.

The comments section also got a bit out of hand as well, so we shut that down too.