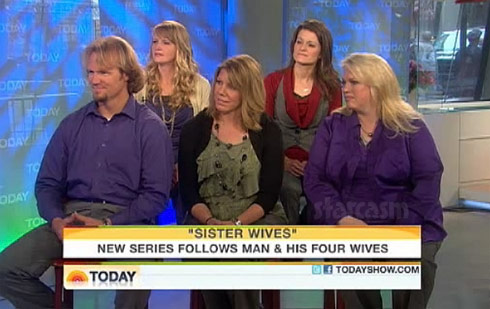 On Sunday night’s Sister Wives special “Meri: Behind the Scenes” episode Meri Brown reminisced about an embarrassing situation when they were first promoting the show before the series premiere. When Kody and all four wives did their interview on the Today show in September of 2010, Meri had to visit the ladies’ room at the last minute and ended up doing the entire interview with her pants uzipped! Being the diligent Sister Wivesologists that we are, we tracked down the clip — which is not only entertaining because of Meri’s wardrobe malfunction, but also because everyone (Kody especially) is so nervous and awkward!

First, in case you missed it, here is how Meri set it all up. “There was a lot of sitting and waiting, and I had been drinking water a lot that morning,” Meri recalls, laughing. “So I just needed to go visit the ladies’ room. And almost as soon as I got in there, there’s a banging on the door. ‘Meri! Hurry, you’re about on!'” At this point we see footage of Meri being quickly ushered onto the Today show set where her co-stars are seated and waiting as Meri continues her story. “So, I ran in there with my pants unzipped.”

“The whole interview with your pants unzipped?!?” Robyn asks, astounded.

“I didn’t realize they didn’t know!” Meri exclaimed. “I totally wouldn’t have said! That was one of those moments that I opened myself up too much, ” she joked.

My apologies if the pretty much imperceptible Meri Brown wardrobe malfunction was a disappointment and far from her “pants were down on national television.” Meri clarified that on Twitter Sunday night while live tweeting the episode:

My pants were not down!! Only my zipper was! #stuck #SisterWives

Meanwhile, in the “regular” Sister Wives episode, TLC left fans with a HUGE cliffhanger as Meri brings up that she wants a divorce, but doesn’t explain why. That leaves the question of “Why did Meri ask Kody for a divorce?” hanging for TWO WEEKS, when we will finally find out during a special two-hour finale on March 1 that includes the final episode at 8/7c and the Sister Wives Tell All special at 9/8c. Here’s a preview clip:

In case you missed it, we were the first to reveal that Meri Brown and Kody Brown divorced in September, 2014. Kody then married his fourth wife Robyn in December, 2014. The Brown family has remained relatively quiet about the reason for the divorce, but did issue a statement a few days after we broke the story which referred to the move as “legally restructuring” their marriages.