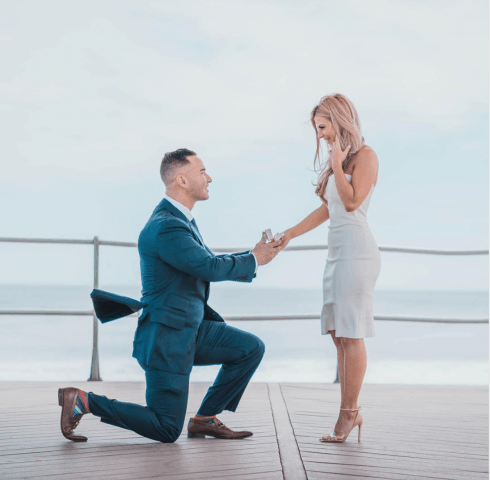 Mike “The Situation” Sorrentino’s dreams have come true! The Jersey Shore cast member proposed to his college sweetheart Lauren Pesce, who he says she’s been with him throughout his darkest times, while recording an episode of the show.

The happy couple shared gorgeous engagement photos on Instagram, and The Situation was ecstatic to share this special moment with his buddies from Jersey Shore.

“I have always dreamed of proposing on ‘Jersey Shore,’ the show that introduced me to the world,” the 35-year-old reality show phenom said. “I’m currently living the dream and proposed to my college sweetheart, Lauren Pesce, amongst my best friends on the biggest reality show in the country. We are so proud and excited to share this chapter of our story with the world.”

Mike met Lauren in college and they dated for four years, but they broke up when Mike found fame during Jersey Shore‘s original run. After the show ended, he and Lauren reconnected, and Lauren stayed by Mike’s side while he recovered from a crippling opiate addiction.

They may have even been engaged once before. When they appeared on Marriage Boot Camp in 2015, Mike referred to Lauren as his fiancée. Soon after, Mike relapsed — but he’s currently been sober for 28 months!

In addition, The Situation has another thing to celebrate: sentencing for his tax evasion case has been postponed.

JWoww on her wedding, kids, and Roger’s skydiving proposal